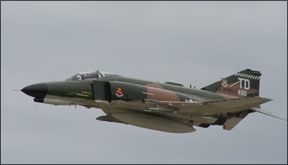 A thick, black fog silenced every sound. It was the right weather for night air defense alert duty at then-West Germanys Bitburg Air Base in the 1970s. The weather was so bad I guessed the nearest alternate was somewhere in Africa. So, it was time to settle down for a night of popcorn and movies. After all, who in the Ramstein command post would be crazy enough to approve a scramble into this kind of weather?

4E Phantom passed through 20,000 feet. Who was the idiot who did this to us? My focus was on the instruments and the intercept, but my thoughts were on fuel, alternates and getting home that night.

There was just enough fuel for an approach at Bitburg and weather divert to Solingen. Bitburg was variable, reporting mile or less in the thickest, blackest fog I can remember. The GCA controller was steady, calm and professional-and it helped. We all were going to earn our beer money that night.

He kept me on course and glide path all the way to minimums. I flew final as slowly as I could to have more precious moments to see the approach lights. I looked over the right side just before minimums. It was still there, the blackest night of my life. I could see nothing-not even the wing lights.

A moment later at minimums, I looked over the left side and saw one faint green runway threshold light. That one light was all I needed. I continued the descent, which took us into a zero-zero fog bank. It seemed a lifetime until we touched down. It was yet another moment before the dim runway lights started to appear off the left wingtip. Everything routine, except we had landed with the left landing gear close to the edge of the runway. My backseater-happy to be back on the ground and eager to break the silence and tension-nonchalantly observed that we somehow landed on the left side of the runway instead of the centerline.

But his question stayed with me for many years: Why were we on centerline at minimums and a few moments later touching down on the left side of the runway? Could the GCA radar centerline have been a little off to the left?

Eventually, I made a connection between the “moth effect” and the one green runway threshold light on the left side of the runway. Humans, like moths, will steer toward a light source. I suspect it was the only thing I saw outside the cockpit and so I must have steered toward it. Would I have resisted that tendency to steer toward the light had I known about this type of hazard? I think yes. Knowledge and being aware of all aspects of flight prepares a pilot for all situations, especially those that come once in a lifetime of flying.