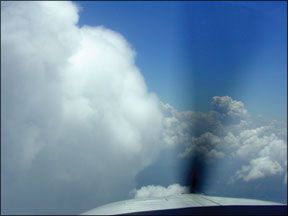 I had been flying back and forth from Buffalo to New York City for some time. One weekend I decided to give my father his first airplane ride. He had never been off the ground, even in an airliner. On a nice calm weekend, I decided to fly him from his home in New York City to where I lived in Buffalo.

The weather was good except for some solid, low stratus clouds in mid-trip. I had to decide whether to fly over the top for part of the trip or duck under the clouds.

I was still a fairly fresh pilot with only about 200 hours, and was worried about an engine failure or other such emergency over a solid undercast. And the undercast lasted for about 100 miles. So I decided that 2000 feet was enough room over the hills and chose the underneath route.

The trip started out nice and smooth. My father was a bit nervous at first, sitting stiffly in his seat. After a while, he loosened up and began to enjoy the scenery. And then we went under the clouds.

For a while, things went fine. But after flying under the overcast for a period, I began to notice something peculiar. The engine sound would rise and fall in pitch over a cycle of several seconds. These surges started to worry me. A glance at the gauges showed the RPM going up to 2400 and down to 2000 instead of staying at 2200. And I wasnt touching the throttle.

I looked at the other instruments and the airspeed indicator was also going up and down, as was the altimeter. What was happening?

After looking around more closely, I noticed that the ground below me consisted of rolling hills. The horizon was lost in the haze and I was trying to fly parallel to the ground to keep a constant “altitude” above it. It took a strong will to revise my flying and keep the wheel steady. This immediately solved the problem and the rest of the flight proceeded normally. My airplane was quite stable and, after I trimmed it for level flight, as long as I just rested my fingers and toes on the controls without applying any “corrective” pressure, it flew itself just fine.

This taught me about visual references and how they could fool you. I learned that VFR meant more than just looking for check points on the ground below. I also had to pay some attention to all the instruments, not just the compass.

I thought about getting an Instrument rating to take care of such problems. But I decided against it. I wouldnt feel comfortable flying without seeing the scenery. Any “emergency” instrument flying I did would be rare. And infrequent instrument flying is probably more dangerous than flying marginal weather within personal limits.

In addition to learning more about flying, I also gained proficiency from this experience. Looking at the scenery is nice. But flying an airplane means being conscious of the things inside the airplane, too.