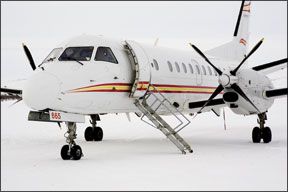 Although many learning experiences come from our own cockpits, we also can learn from listening to the pros. The howling snowstorm outside my house had forced me to cancel my plans to practice local instrument approaches. I still wanted to do something aviation-related, and this day that meant listening to the nearby approach control frequency.

The ceilings were hovering around 200-300 feet and the RVR (runway visual range) was about 2200 feet. Most of the big iron was getting in but a regional turboprop crew noted the RVR was just below minimums for them. The controller asked if they wanted to hold to see if conditions improved and, when they agreed, vectored them away from the instrument approach.

For the next hour the controller and flight crew worked as a remarkable team. The controller kept the crew updated on the weather and the aircraft close to the approach so if conditions improved the turboprop easily could be vectored to intercept the ILS. The crew stayed calm and professional, continually weighing their options. After an hour of holding, the crew elected to return to their airport of origin, a scant 50 miles northwest.

What was completely missing from the crews behavior was any evidence of “get-there-itis,” “lets just try the approach and see what we can see” or a temptation to push approach minimums that kill numerous of our general aviation instrument-rated brethren every year.

Of course, company procedures and FAA rules prohibit them from acting otherwise, but I cannot think of a single argument for flying a GA aircraft in any way other than how this crew behaved. They maintained strong professional discipline, and were unwilling to bend the rules to attempt an approach that would be a violation of maintaining the highest possible level of safety.

I imagine the passengers were annoyed about flying for an hour and not making any of their connecting flights, neither aware nor appreciative of the professionalism and safety consciousness of their crew. But for me, as a new instrument-rated pilot, I learned a rock-solid lesson on cockpit discipline and calmness that is as applicable in my cockpit as on any airliner. If I am ever faced with attempting a questionably safe instrument approach, I will use this crew as a role model, weigh my options calmly and fly to better conditions if necessary.