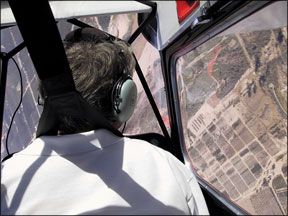 One sees that quote in many places and, on one level, its easy to understand. The irony is one must obtain some experience before understanding it on other levels.

Like most young aspiring pilots of the day, I was building time flight instructing.

This was in the early 1960s, when the trainer of choice was the Piper Colt. This was a very forgiving airplane, even though it didnt look like one.

After shepherding a student through his private certificate, he purchased half interest in a Bonanza. He needed 25 hours of training to satisfy the insurance company, so off we went. After the required training, I endorsed his logbook. Soon, however, I watched him make a very short pattern with steep turns. Despite lecturing him many times on the respect he must have for this aircraft, I decided to show him first-hand.

Earlier in his training we did a lot of spins. It was not easy to get the Piper Colt to spin; thankfully, it required little effort to recover. Strapped in to the Bonanza-by this time sans the dual yoke we used for his first 25 hours-we took off and I said, “Climb to three, no, make that four thousand feet.” This was my one good decision. It crossed my mind that we no longer had the dual control wheel.

“Okay,” I said. “Slow up, put the gear down, add flaps and adjust the throttle.” Once that was accomplished, I directed him into the simulated left turn to final as steep as he had flown earlier. An approach-to-landing-stall, caught well before entering a full spin, was my plan.

“Now use some top rudder and more left aileron.” Bingo! Stall warning, one little shake and nothing but spinning cows and barns in front of us. I grabbed the gear and flap switches, got his hand from the throttle and stopped the spin. Now we were in a vertical dive in a very clean airplane with a bad reputation for such things. With both hands on the large tube that had a control wheel only on left side I started a slow smooth pullout. We completed the recovery well below 1000 ft. agl.

That was 44 years ago. I now have 28,000 hours of experience I almost didnt get if it hadnt been for the one good decision: climbing to four thousand feet instead of three.