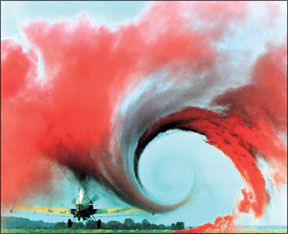 In the early 1970s, I took my daughter on a flight from Orange County to Oakland in an American AA-1. A headwind required us to make a fuel stop.

I decided Bakersfield would be a good place to refuel, relax and have a bite to eat. The tower cleared me to land on two-mile long Runway 30R, but then asked me to switch to the shorter 30L because a heavy military transport was arriving. “No problem,” I thought.

As I landed and rolled down 30L, I saw on my right a huge, dark airplane rolling past on 30R. There was a slight right component to the wind coming from about 330 degrees. Then, suddenly I found my airplane had turned 90 degrees to the right

and was rolling directly toward the middle of the field. I put both feet on the left rudder pedal and brake, pushing as hard as I could, hoping to avoid hitting anything. It seemed to take forever for the airplane to respond. We managed to miss the wind T by less than 20 feet and continued on toward the taxiway to the refueling facility.

As I approached the taxiway, the tower called and asked if there was anything he could do to help. My reply was, “Its too late now.”

I learned hard lessons from this experience. Since then, whenever possible, I avoid airports large enough to handle heavy traffic. This has the added benefit of avoiding delays in negotiating traffic on both takeoff and landing. An additional advantage is that I avoid the various higher fees and fuel costs associated with large airports.

Since then, controllers have become aware of wake vortex problems and now pay more attention to spacing airplanes of different sizes. Even so, there have been recent accidents, some fatal, when controllers become overburdened or careless.

Some of the blame can be put on pilots of the smaller airplanes, who should take the initiative in looking around for other traffic that might pose such dangers. And, as I have learned, to not be bashful about questioning controllers. When in doubt, speak up.

If I had been about half a minute later in my approach, I would have had a bent airplane. Luck seems to have a lot to do with “safety.”