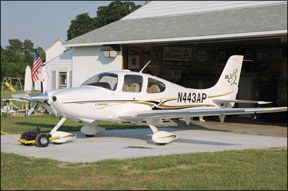 In a recent ferry flight, I encountered a sudden and very irrational electrical and avionics failure as I entered IMC conditions. I was in a Cirrus SR22 with an Avidyne MFD, an Aspen PFD and a full set of steam gauges to boot. Within about one minute of entering the clouds for a descent, instruments

began to fail and then come back on. They often came back with confusing data. The twin Garmin 430s also failed and came back-and then failed again-and so it went for what seemed like hours.

The situation was fairly critical since I really was in IMC and the 4500 ceiling called by the weather folks did not conform with the very dark and grey soup at 4000 feet. My no-gyro procedures saved the day in the end, but there was a much more important factor to come out of the situation.

The plane had been based in Florida for years and had experienced an MFD failure a week before while on a flight to Minnesota. The avionics shop had found some slightly corroded connections and cleaned and tightened them. All seemed normal. I suspected a relapse and went to a well-respected avionics shop for another “once over” to see what might be wrong.

After a thorough check, some additional minor corrosion was found in some connections, and a few worn or loose connections and associated wiring were replaced. Thats when the real culprit was discovered.

As one panel was being removed to check for the grounding wire connection, a paste-wax residue was discovered.

The wax was a silicone-based product and, on Cirrus and other carbon/composite aircraft, such wax impedes the ability of the structure to dissipate static through the skin of the plane. Our great-looking machine with the shiny sheen was really keeping way too much bottled up inside and was ready to cause us to self-destruct if we didnt clean off the wax.

So, one good wash later we test-flew the plane into cold and cloud and all manner of static-producing conditions, and found the instruments all worked fine, no more failures and one great lesson learned: Do not use silicone-based waxes on composite aircraft.

There are a number of excellent wax products designed to be used on Cirrus, Diamond and other composite aircraft, but stay away from the silicone-based ones as they block static discharge.