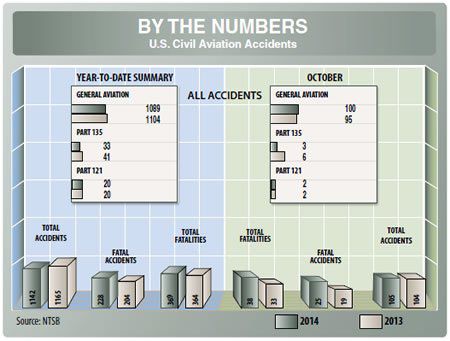 The aircraft collided with terrain at about 1030 Pacific time. The solo private pilot sustained serious injuries; the airplane sustained substantial damage to the fuselage and right wing during the accident sequence. Visual conditions prevailed.

As the airplane departed to the south, a witness watched it climb to about 100 feet agl and began a right crosswind turn. Once the turn was completed, the engine started to surge and then lost all power. The airplane began to descend, and at about 15 feet agl the right wing dipped and struck the ground. The airplane then cartwheeled, coming to rest upright on its landing gear.

At about 1440 Central time, the aircraft experienced a total loss of engine power during cruise flight. The solo commercial pilot subsequently made an off-airport forced landing to a road in a cemetery. The pilot was not injured; the airplane sustained substantial damage to a longeron. Visual conditions prevailed.

The pilot reported he was in cruise flight at about 75 percent power when the engine made a little skip. He immediately turned the airplane in the direction of the airport; however, the engine experienced a total loss of power. The only clear area to land he observed was a road running through a cemetery. While on approach to the road, the left wing struck a tree, the airplane veered to the left and impacted a tombstone. Initial examination revealed the engine would partially rotate through one revolution and then seize. The fuel/oil mixture appeared normal in color.

The airplane experienced a runway excursion and suffered a nosewheel collapse at about 1030 Central time. The solo commercial pilot was not injured. Visual conditions prevailed.

After landing, the airplane veered off the runway surface. A preliminary examination of the airplane revealed substantial damage to the firewall. The airplane was retained for further inspection.

At about 1340 Eastern time, the airplane was substantially damaged when it impacted a residence just after takeoff. The solo private pilot was fatally injured. Visual conditions prevailed.

A witness reported that he and the pilot had been working on the accident airplanes engine for several weeks. On the day of the accident, the pilot stated that he was going to perform some high-speed taxi tests, and that he might attempt to fly the airplane. The witness observed the pilot taxi to the runway, apply power and became airborne. The witnesss last view was of the airplane in a nose-high attitude, appearing to be struggling. First responders stated fuel was leaking from the airplane. There was no post-crash fire.

The airplane was substantially damaged at about 1730 Central time upon impacting an obstruction and terrain during an approach. The pilot and one passenger were seriously injured; the other two passengers sustained minor injuries. Night, low visual conditions prevailed; an IFR flight plan had just been cancelled.

Examination of the airplane revealed all three propeller blade tips were missing and the left wings fuel tank had been penetrated from the leading edge to the front side of the spar. All three propeller blade tips and a portion of the left flap were found on the ground near the base of the tower. First responders later reported the white strobe light on the top of the tower was still operating. At 1652, weather observed about five miles northwest of the accident location included visibility of 10 miles and overcast clouds at 1800 feet.

At about 1220 Central time, the airplane experienced a flight control anomaly after takeoff, and an emergency landing was performed. The pilot and passenger were not injured, and the airplane was not damaged. Visual conditions prevailed for the post-maintenance check flight.

After takeoff, when the airplane reached about 400 feet agl, nose down-control forces became extreme. He and the passenger had to pull hard on the yoke to keep the nose of the airplane from pitching down. The elevator pitch control was nearly in the full nose-up trim position. He declared an emergency and maneuvered the airplane to land. While on final approach, the pilot applied nose-down trim using the electric trim on the control yoke, which reduced the nose-down control forces. The pilot landed without further incident. Inspection revealed the airplanes elevator trim system cables were reversed.

At about 2100 Central time, the airplane experienced a flight-control malfunction while on approach. The pilot and co-pilot were not injured; the airplane was not damaged. Night visual conditions prevailed for the Part 135 on-demand flight, which operated IFR.

The airplane was substantially damaged at about 1315 Mountain time when it impacted terrain after experiencing a loss of engine power during approach to landing. The solo private pilot was not injured. Visual conditions prevailed.

The pilot subsequently reported he had taken off from the private airstrip about 30 minutes earlier. While in the traffic pattern for landing, the engine started to lose power. When he realized he was too fast on the approach, he tried to lose airspeed. The airplane subsequently impacted a fence bordering the airstrip, resulting in substantial damage to its left wing.

The airplane impacted terrain and houses about 0.75 miles short of the intended runway at about 1041 Eastern time. The airline transport pilot and two passengers were fatally injured, as were three persons on the ground. The airplane was destroyed during the impact and ensuing fire. Marginal visual conditions prevailed; the flight was operating on an IFR flight plan.

At about 1315 Mountain time, the French-made former military jet trainer landed hard during an off-airport forced landing. The solo commercial pilot was not injured. The airplane sustained substantial damage to all components of the airframe during the accident sequence. Visual conditions prevailed.

The pilot later stated he had no mechanical issues with the airplane and that he should have had about 1.5 hours of fuel remaining when both engines flamed out.

The airplane was substantially damaged at about 1110 Eastern time during an off-airport landing. The student pilot received minor injuries. Visual conditions prevailed.

The student pilot subsequently reported cruising at 2500 feet msl to remain under a cloud ceiling. Halfway through the flight, he noticed ceilings were lower than anticipated and decided to return. Two minutes after turning around, the engine lost power to below 2000 rpm. The pilot applied carburetor heat, to no avail. While on approach, he gradually lost more power and landed in a field.

At about 1435 Central time, the airplane impacted terrain during an approach to land. The solo student pilot was seriously injured; the aircraft was substantially damaged. Day visual conditions prevailed.

The student pilot later reported entering the traffic pattern for a full-stop landing on Runway 33. He observed a Sikorsky UH-60 helicopter on downwind and delayed his turn to base until the helicopter was on final, abeam his position. While on final, the student pilot adjusted his aim point to avoid the helicopters wake turbulence and land beyond the helicopters touchdown point. Just prior to landing, he encountered turbulent air and attempted to go around. The airplane subsequently impacted terrain and cartwheeled, which resulted in damage to the fuselage and wings.

An airport surveillance camera captured the accident airplane approaching the runway about 30 seconds in trail of the helicopter. Reported wind was from 110 degrees at three knots.

The pilot later stated she intended to perform touch-and-goes in the landing pattern. The preflight, run up, and takeoff were all normal. After the first landing, she added power to takeoff and once there was no usable runway remaining, raised the landing gear. At 100 feet agl, the engine went silent. The pilot picked a clear area to fly toward and lowered the landing gear. Witnesses stated that the airplane landed hard, bounced, landed a second time, impacted a trailer and a large pole, and came to rest inverted.

At about 1400 Mountain time, the helicopter impacted a two-story building while maneuvering. The commercial pilot-rated mechanic and passenger were fatally injured. The helicopter was substantially damaged. Visual conditions prevailed for the post-maintenance test flight.

Witnesses reportedly heard popping sounds, then saw the main rotor and empennage separate from the helicopter as it flew overhead. The main rotor blades and empennage impacted the ground a few hundred feet from the building. Reportedly, the purpose of the post-maintenance flight was to check the track and balance of the main rotor blades. A post-impact fire was concentrated at the main wreckage. The debris field was about 880 feet in length and about 400 feet in width.

According to the pilot, after touching down at an unspecified time, the airplane floated back up, then touched down again with authority. It bounced again, then weather-vaned some, and the pilot became concerned that the airplane was chewing up runway. The airplane then touched down a third time, but the pilot did not pull back on the yoke. He subsequently heard the propeller strike the runway, the airplane then veered off the right side of the runway, the nose landing gear collapsed and the engine mounts broke. The pilot indicated that there were no preexisting mechanical anomalies that would have precluded normal operation. Nearest recorded weather included winds that were about 90 degrees from the right of the runway, at 10, gusting to 15 knots.

At about 1930 Central time, the airplane collided with terrain following an uncontrolled descent. The private pilot was fatally injured and the airplane was destroyed. Night instrument conditions prevailed; no flight plan was filed.

The pilots wife believed he was going to taxi to refuel the airplane for a trip he was planning. When he did not come home that evening, she contacted local authorities and a search was initiated. A witness subsequently stated it was dark and misting on the night of the accident. He heard an airplane flying overhead, and then heard the engine rev up before hearing a loud crash. Weather observed some 25 miles from the accident site included wind from 020 degrees at nine knots, four sm visibility in mist and an overcast at 400 feet agl.