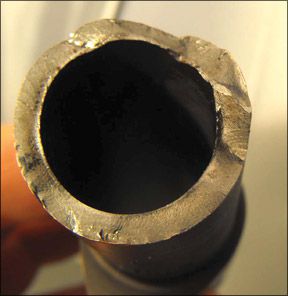 Before a touch-and-go landing, the pilot noticed did not receive a gear-down light for the left main gear. A safe landing was made, with minor damage and no

injuries. Upon examination, one of the left main landing gear actuator hydraulic fittings (p/n: MS20822) was found broken flush with the actuator housing. Examination of the gear well and the general layout of components show the flex hose may have been stress loaded while the gear was retracted.

The left hand, aft wing strut attachment eyebolt pulled out of the threaded lift strut fitting, resulting in loss of vertical control. The pilot/owner landed in a tree and walked away; the aircraft was substantially damaged.

The engine became rough after takeoff. The pilot returned for a safe landing. Investigation revealed the number one cylinder to be colder than the others. Eventually a cylinder was removed and the AEL18840 camshaft found broken. The fracture appears to originate at the base of the letters “E” and “L” of the stamped part number.