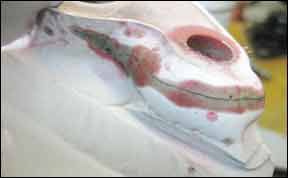 After takeoff on a post-inspection flight, the pilot heard a “snap” and the aircraft pitched up. Control was regained by reducing power and using elevator trim. The aircraft returned for a successful high-speed wheel landing.

The elevator cable (p/n 414-187097-1) broke at the pulley above the tail wheel, at bulkhead number 14. The pulley was free to rotate but exhibited signs of wear-possibly from over-tensioning of the cable. Further inspection revealed broken cable

strands in the area of its attachment to the elevator control bull wheel.

The rudder horn tube (p/n 63547-000) was found cracked at the weld assembly (p/n 63546-000) on the underside of the weld bead. The area in question exhibited signs of excessive weld penetration along with projecting globules, indicating improper welding techniques.

A fuel cell (Floats and Fuel Cells p/n 5712) seam failed while the aircraft was parked on the ramp, suddenly emptying its contents. There were no prior indications of improper installation or other damage. The bulk of the fuel followed the main spar into the belly of the aircraft, then out through drain holes, vents and seams in the skin.

After the aircraft was levelled off at around 15,000 feet, the left side cockpit window fractured and its center portion departed the aircraft, removing the pilots headset in the process. Piper SB1175A pertains to cracking at the lower aft rear corner of the storm window. That area of the window remained intact. A new window (p/n 82282-022) without the storm window was installed.

After an oil change, the pilot complained of oil on top of the nose gear well area behind and below the engine. The engine compartment was cleaned and inspected for leaks. None were noted.

A week later, the same complaint was made. The engine compartment was cleaned again; the plane was flown around the pattern and returned to the shop. A few drops of fresh oil were noted. The oil cooler was removed and a large, hidden crack was discovered. The crack appears to have developed in one of two ways: a casting flaw or imposed stress at the time of installation.