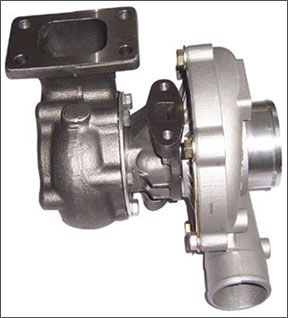 During an accident investigation, the top l/h engine cowling was found with evidence of fire damage. The l/h exhaust manifold pipe was loose and the l/h turbocharger clamp was

lying in the bottom of the engine cowl. This aircraft was destroyed in fire, sustaining one fatality. Exhaust clamp p/n: MVT69183200LW1. The engine was a Lycoming TIO-540-J2B, presumably installed under an STC.

An aviation school operating five Piper Archer aircraft is replacing wheel assemblies on many aircraft due to Airhawk tires wearing a groove into the inner rim of the outboard wheel half. The school reports its tires are in good condition and underinflation is not an issue. McCreary Airhawk tires: 6:00 x 6; Parker wheel assembly p/n 40-86B.

The aircraft was flying at 5000 feet when its engine started to lose power, then failed. It landed safely in a field. The engine was disassembled and inspected. The crankshaft was found to have cracked and was separated at the forward end of the number four crankpin journal. This caused the engine to lock up. Crankshaft p/n: 13B27134.

After installing a Kelly-overhauled turbocharger onto a Continental LTSIO-360-EB in a Piper PA-34-200T Seneca, one hour of flight time was put on the part. After several days of additional maintenance and poor weather, oil was discovered dripping from the lower cowling during pre-flight. Oil seals inside the turbocharger were leaking. A second Kelly-overhauled turbo was installed and the aircraft test-flown. After several more days-again involving unrelated maintenance and poor weather-another test flight was scheduled. Once again, oil was found on the preflight inspection. The second turbocharger was scheduled to be replaced with a third unit.