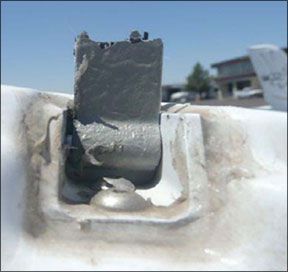 At rotation speed on the takeoff roll, the aft passenger door (p/n DA4-5221-00-00-2) departed the airframe, narrowly missing the tail plane and rudder. The door was later recovered. The aft hinge was broken off and the forward hinge damaged. Investigation revealed the hinge had cracked (then broke), due in part to the materials used in part fabrication and the high pressure placed upon it by the door opening strut (p/n DA4-9052-00-11).

The door and hinge are one assembly made of composite material. The hinge is approximately -inch wide. The strut is attached near the rear hinge. It exerts approximately 90 pounds of force near the hinge attach point. Even though the door employs a safety latch handle, when the aft hinge fails the door flexes enough to slide past the stop.

Inspection of another aircraft in this operators fleet found another in-flight door separation.

The instructor and student were practicing autorotations. On the third autorotation, with the aircraft settling to the ground, the student was “inputting

right pedal” to compensate for torque loss when a loud “snap” was heard. It came from the pilot-side tail rotor pedal area. The pedals became bound in place.

After shutdown, inspection found the bearing block support (p/n A359-2) for the pilots side pedals had broken.

The Cessna 421B engine was removed and sent to Ram Aircraft for repair. The engine was returned and reinstalled. Two months later, during a night flight, the pilot experienced an alternator failure, which he reported the next day.

On inspecting the alternator, it was found in pieces, with the mount housing still attached to the engine. The inside of the alternator installation hole was inspected, revealing the attach bolts on the alternator face gear had no tab lock plates installed (p/n 641909; item number 20).

We concluded the attach bolts came loose and damaged the engine and alternator. Ram Aircraft was notified of the problem. It is recommended that an inspection for missing parts in the alternator attach hole before engine installation be conducted.