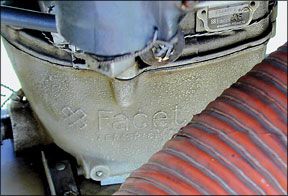 “While in flight,” states a technician, “the pilot reported he could smell something burning-he landed as soon as was practical. Investigation revealed the wire from the alternator to the ammeter (p/n 112) had shorted against the firewall….” “Wires 112, 114, the master relay, starter relay, voltage regulator and alternator were all replaced.”

After sitting idle on a ramp for at least 10 months, the airplane underwent maintenance. A strong fuel odor was observed in the cabin; an exterior inspection failed to detect anomalies. The odor subsided. Once the engines were started and the fuel selector placed in crossfeed, the odor returned.

After removing the floorboards, a heater duct running perpendicular to the crossfeed lines was observed to be in contact, causing corrosion. Pinhole leaks had developed in both lines, p/n 5300108-53 and -54.

The engines idle and low-power performance were erratic. Fuel was noted dripping from the carburetor/induction air box after shutdown. After disassembling the carburetor, the hollow plastic float was found half-full of fuel. The upper portion of the float assembly appeared partially de-bonded from the lower section, allowing fuel to begin leaking into the assembly. Once the float lost its buoyancy it could no longer restrict the fuel source.

Upon disassembly, this carburetors float (p/n 30802) had taken on fuel and was sunk. Similar to the report above, the submitter stated “polymer floats have a significantly reduced wear life of only about 500 hours instead of 2000 hours for the carburetors this float is installed in” and recommends all polymer floats produced by Precision Airmotive be recalled, an AD issued, and the new Composite float be installed as soon as possible.

Upon disassembling the starter from an O-320 Lycoming mounted on a Cessna 172, a technician discovered a segment of the commutator had come off, destroying the brushes on the inside of the starter.