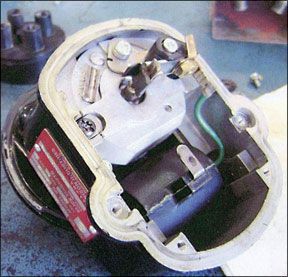 Transport Canada (TC) in late 2009 issued a Service Difficulty Alert detailing failure of a parked aircrafts control yoke that broke during high-wind conditions. A complete fracture occurred between the yoke pivot area and the elevator attachment point due to severe internal corrosion. A 2001

During routine inspection, the outboard-most flap bell crank
(p/n 2622091-1) was found corroded and frozen. The bolt was frozen to the bushing (p/n 82614-4-100N), preventing the bolt from rotating inside the bushings and elongating the mounting brackets (p/n 2622101-3) bolt hole. When the flap handle was selected “up,” the cable would wrap around the bell crank, causing high cable tension.

On visual approach, the co-pilot complained the aircraft was out of rig and wanted to roll right with flaps at 35 degrees. On inspection, the right flap was discovered fully extended and its drive linkage was disconnected.

While performing incoming inspection of a new TCM cylinder (p/n 655484A5) for an IO-550, the cylinder pushrod housing boss was found not to have been machined for its seal.

The magneto was inspected after excessive engine RPM drop during run-up. The technician found the gearshaft failed at the base of the slot retaining the points cam. When removed from the cam, one side of the shaft stayed attached to the gear.