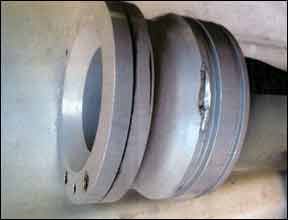 Beechcraft B200 King Air
Bad Rivet Installation
While complying with Service Bulletin 55-3835 “Installation of Empennage Inspection Access Panels,” the horizontal stabilizer forward spar and ribs were found not riveted correctly from the factory. Many rivets that go through the forward spar are too short, and where the rib and forward spar come together, the rivet misses the rib. We have found this same problem on other aircraft we have inspected.
Part(s) Total Time: (unknown)

Cessna 208B Grand Caravan
Collapsed Engine Vent Line
While inspecting the overboard breather vent line, the rubber section was found swollen internally. The inspection was part of a fleet-wide campaign to address aging hose sections. Operators of older Caravans would be wise to check their aircraft for similar defects.
Part Total Time: (unknown)

Continental IO-550-N
Corroded Fuel Injector Nozzles/Lines
A submitter reports finding the upper deck line rusting internally on Tornado Alley turbo-equipped aircraft. The rust consists of both large and small particles that are easily dislodged. Aircraft with this condition exhibit rust stains on and around the fuel injectors observed when the injectors are removed for cleaning. This rust could accumulate and possibly clog the fuel injector air passages. The submitter has noticed this condition on two different aircraft equipped with STCs SA10588SC and SE10589SC installed on Cirrus SR22 airplanes.
Part Total Time: 1002.0 hours

McCauley D3A32C406-C Propeller
Broken Bearing Race
Oil was found on the A36 Bonanza’s cowling. The propeller was sent to a prop shop. Most of the ball bearings measured the proper size of 15/32 inches, but one bearing measured 16/32 inches. The blade and hub were not repairable. Complete failure of the propeller was imminent.
Part Total Time: 170.47 hours