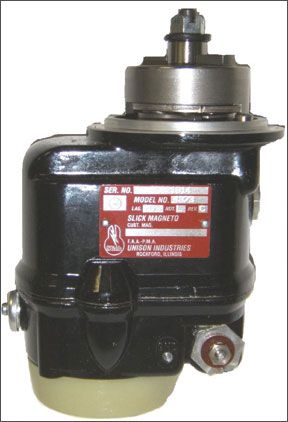 The right aileron was binding during aerobatic maneuvers. Investigation revealed the clearance between the aileron and the aileron bay rib was approximately 1/16 inch. Per American Champion, it should be inch. The inboard aileron bay rib appeared to have bowed due to fabric shrinkage, causing the

interference. The aileron rib fabric was opened and the rib was relocated outboard 3/16 inch. Per the manufacturer, aileron balancing was not required. The aileron was reinstalled, with the clearance and operation satisfactory.

During a run-up, the pilots right rudder pedal exhibited an unusual feel while braking. Subsequent inspection revealed each of the pilots side inboard rudder pedal bearing halves (p/n S1675-1) had broken into several parts.

These bearing halves are constructed of plastic, and the likely reason for breaking would be due to its aging and embrittlement. Recommendations fabricating the bearings from a material other than plastic or a replacement interval.

The arm for this magnetos contact points broke inboard of the points after only 133.1 hours time since installation. The magneto was installed on a Lycoming O-320E2D in a Cessna 172M. Point set p/n is M3081.

A repair station technician discovered a shattered starter end cap. The station reports it is the third occurrence of this problem seen on Cessna 172S airplanes.