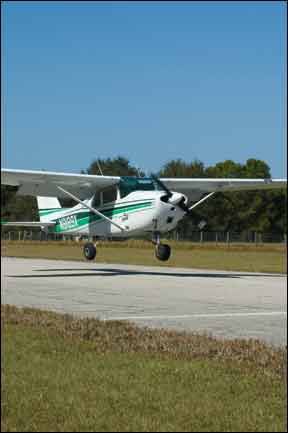 In Aprils “Using Ground Effect,” I think the author made an inaccurate and misleading statement concerning the aerodynamics of ground effect. The article wrongly asserts Newtons equal and opposite force has different effects when operating close to the ground as opposed to at altitude. He states, “At altitude, of course, theres no reaction between this downward forced air and the wing because

theres nothing against which it can react.” If this were true, an airplane wing would not be able to fly when at altitude and only achieve lift when close to the ground.

Of course, we know this not to be true. At subsonic speeds, air is incompressible, so theres no real difference in lift attributed to the equal and opposite force whether close to the ground or at altitude. The “bounce back” effect described by the author is as effective whether the air is “bouncing back” from the air below or runway pavement below.

The fact we feel additional lift is only an indirect result of the decrease in induced drag, allowing us to fly at a reduced angle of attack to maintain lift when flying close to the ground.

Thanks for an excellent magazine, the best aviation magazine by far in my opinion, and I subscribe to seven of them.

Youre right, of course, about Newton and whether or not downward-forced air reacts against the ground or other air. The correct answer is “it reacts against both.”

Marchs article, “Owner-Performed Maintenance,” includes a sidebar, “Preventative Maintenance Gotchas,” which discusses updating databases and the need to make a logbook entry when doing so.

We own a plane and, just as the article says, we update our databases every month. We could not find where in Part 91 it says a logbook entry is required. Can you please point me to the area so I can read it? I want to make sure I am doing this correctly.

Thanks; love the magazine. Its articles like this that make our skies a little bit safer.

You wont find this in Part 91, which deals with general operating rules. Instead, you need to dive into Part 43, specifically Appendix A, which describes preventive maintenance and the persons eligible to perform it. Note each permitted task also requires someones signature returning the aircraft to service. Peruse FAR 43.9 for that regulation. You also may be interested in Advisory Circular AC 43-12A, “Preventive Maintenance.” Its available on the FAAs Web site, in PDF format, at tinyurl.com/avsafe-pmac.

We dont advocate it, but operators routinely ignore this requirement.

Its not often that I read an article (“Glider Lessons”) like the one Steven Gibbs wrote in the March issue. In this world of automation and digital flat plate display this and that, many are losing the real meat and potatoes skills involved in flying. Gibbs article explaining the importance of angular references and a sort of visceral innate sense of geometry that needs to be developed in all pilots was a rare and lovely thing.

I taught in the USAF and in the training department at a major airline, and was often struck by how important it is to know how to maneuver airplanes correctly. Even today, in my modern MD-88 (well, sort of modern), the pilots who look outside and think and fly the way Gibbs described fly so much more smoothly and elegantly than the automation slaves.

Dave Higdons article about landings was also good, but I would have written it differently. He says that the ability to land within a few hundred feet of a target is a good skill. Well it is, but only if you cant cheat with power.

In my J-3, I worry that Ill botch an engine failure landing someday, missing my intended soybean field. So, when I land, I try to hit the target mark on my grass strip using idle power from pattern altitude.

Im not good enough to do this with a perfect pattern; I have to shorten up a turn here and there, but every pattern is a practice engine-out landing lesson in gliding geometry and wind awareness. It forces me to keep my head outside and stay aware of the winds. It would all be pretty useless if I could modulate power.

Although Gibbs article necessarily delved into the concept of power-off landings and decision-making in the traffic pattern, neither article was designed to discuss power-off landings of a powered airplane. We worry well botch one of those someday, too, so look for an article providing some additional details and thoughts on them in the very near future.

An add-on commercial glider rating in 1985 helped provide confidence to safely land my 1948 Cessna 170 after five subsequent partial power failures the next 25 years. Each failure followed hours to two years after mechanic errors during annual inspection at four airports. The transition to gliders came easily after 1466 hours of mostly taildragger flying in a previously owned 7CCM Champ, a 1953 Cessna 170B, a 1946 Globe Swift and, since 1976 and continuing, in a 1948 Cessna 170.

My glider log includes a tow-rope failure forward of the weak link, during glider flight 99, while on tow at 250 feet. A 180-degree turn and on-field downwind landing caused no damage. The only error was neglecting to pull the tow release to remove the remaining tow rope, since the landing had to be made over a 10-foot fence surrounding the now-closed Fremont, Calif., glider port. Most of my glider flights involved ridge soaring along the mountains east of the gliderport and a little wave soaring.