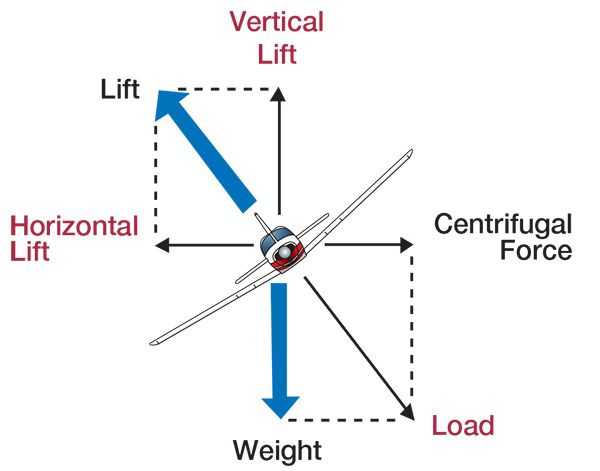 I enjoy reading your journal. I just read your article, “Steep Turns,” in the September issue. Although it is well-written, I have an issue about the description that the horizontal lift component “actually” turns an airplane on page 9.

As written in “Emergency Maneuver Training” by Rich Stowell, the primary turn control is done by elevator. As you see in videos of fighter planes, banking just pushes an airplane sideways by this horizontal component of lift. A trajectory of an airplane can look like a turn. But it should not be considered how an airplane “actually” turns.

Out of the three primary control inputs, pitch is the only motion that can create a curved flight path. From straight-and-level flight, a pitch input only results in a loop. I envision that a turn is a horizontal version of a loop. As an airplane needs lift from a wing, such looping can be accomplished by banking an airplane. Practically, aileron inputs only give an inefficient turn. You need to pull a yoke to turn. It is an important concept as a student is just taught to use an elevator for maintaining the altitude due to loss of the vertical component of the lift, for example, then he/she may not appreciate why an instructor says pulling a yoke results in a tighter turn. Increased load factors also can be explained by this looping mechanism and the relationship to elevator inputs.

Thanks for the kudos! To fully parse the relationships between ailerons and the pitch control, we need to acknowledge that all controls, including the rudder, must be used in a coordinated fashion, to achieve the desired airplane attitude. We also need to differentiate between shallow, medium and steep turns performed while maintaining altitude as well as extreme maneuvering like upset recovery.

The quote you cite regarding the horizontal component of lift (HCL) “actually” turning the airplane is in a discussion of the graphic above, which presents the forces on an airplane in a medium-banked turn. We maintain that—at non-extreme bank angles—the HCL is what turns the airplane in level turns. As bank angle increases in a level turn, greater pitch-control input is necessary to maintain altitude. We have no doubt that the pitch control can be used to manage bank at extreme angles, but such maneuvers are beyond the scope of our article.

Importantly, Rich Stowell has contributed to this magazine in the past and we have the utmost respect for his expertise. The book you cite is subtitled, “Controlling Your Airplane During A Crisis,” and we would wholeheartedly recommend it to pilots seeking information on maneuvering at extreme angles during and recovering from in-flight upsets. 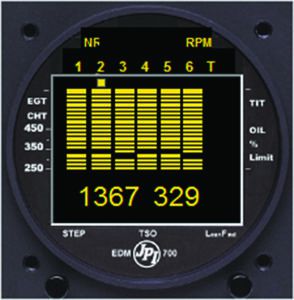 A couple of comments on Mike Hart’s excellent article, “Magneto Management,” in October’s issue. First of all, the in-flight mag check briefly mentioned in the article and Jeb Burnside’s sidebar is one of the most valuable tools we have for checking spark plug condition and integrity! I am amazed at how many pilots are reluctant or afraid to check their mags while airborne! A properly done in-flight mag check, preferably at altitude, cruise power and lean of peak exhaust gas temperatures can reveal impending plug issues you’ll never detect in the before-takeoff check or even in flight at low power settings and rich of peak.

For the last 20 or so years, that check has been SOP for me before starting my descent on cross-country flights in my IO-550-powered Bonanza. At altitude and lean of peak, it takes a really hot spark to ignite that lean mixture and if the spark is “substandard,” you’ll get a complete dropping out of that cylinder—there will be no doubt in your mind, or an intermittent and random “chugging”or “thudding” caused by cycle to cycle variability. The mixture composition from a cylinder’s combustion cycle may vary slightly, and the occasional very lean version may not be ignited by the weaker-than-normal spark.

With an engine monitor, it’s easy to pinpoint the offending spark plug and replace it on the ground at your leisure before it gets bad enough to fail the pre-takeoff run-up and send you unexpectedly back to the hangar or FBO!

One last thing, and this seems obvious, but if you’re flying behind a constant-speed prop, don’t expect to see an rpm drop like you would in a ground run-up, just a brief, very small fluctuation in rpm.

Thanks, Jim. We’ll plan an article on using engine monitors, plus lean-of-peak operations, for an upcoming issue.

I enjoyed Tom Turner’s “Cleared for the MSA?” July 2020 article. It is a point that was taught to me during my instrument rating instruction, as that was only five years ago. But, I am confused about one part in his article.

I understand the example, given from Mr. Turner’s real-life experience, of the clearance for the RNAV Rwy 1 at Emporia. That is a TAA RNAV approach, and I’d been taught just what retired ATC John Foster said, as quoted in the article: “Think of a TAA sector as a very broad feeder route.” Therefore, once in a TAA sector, you are established on a segment of the approach and can descend to its altitude. However, John Foster also makes it clear that TAA altitudes are not MSAs; RNAV MSAs are not interchangeable with RNAV TAA altitudes. He then quotes two sections of the AIM, 5-4-5 d. 5. (a) and (b) to make his point.

My confusion starts when Mr. Turner talks about RNAV approaches that are not TAA. For instance his statement: “Given that we’ve already learned that TAA and MSA are essentially interchangeable terms when operating with RNAV…” And, more to the point, the two IAP plan views (bottom of page 10) showing ILS or LOC Rwy 34 and RNAV Rwy 34, and the text next to these plan views saying “Both also have a published MSA….But only one allows descent to that altitude with a specific clearance.” This contradicts John Foster’s later statement, “I give the controller a B-…you can descend, but not to an MSA… They are not considered a published segment of an approach.” And it contradicts the AIM statement “… unlike MSA altitudes, the TAA altitudes are operationally usable altitudes.”

A typographical error crept into the quote you cite. As published, that sidebar reads, “Both also have a published MSA—using different identifiers. But only one allows descent to that altitude without a specific clearance.” That said, we agree with your concluding paragraph.