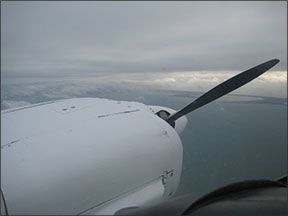 I think it should be every light twin pilot’s responsibility to be current and proficient enough to safely handle an engine failure no matter where they occur. On takeoff, this can only be done safely with enough runway for an accelerate-stop distance computed for load and density altitude. Furthermore, compute single-engine climb performance for the conditions at hand.

While it is not illegal to take off with either or both conditions not met, they will tell the pilot what kind of performance he will have in case of an engine failure. Only when a climb on a single engine is not substantiated by the manual would I consider my light twin as a glider on one engine. Still, by flying the light twin correctly on one (failed engine feathered, gear and flaps up, maximum power on the remaining engine), by establishing a slight bank toward the operating engine and placing the inclinometer’s ball halfway towards the same engine, not only will VMC be reduced but a greater rate of climb will be achieved.

In practice, I have seen a climb-rate increase of 300 feet per minute by flying a light twin this way. That additional performance could be enough to keep it from becoming a smoldering heap of aluminum rubble and allow landing it on a piece of pavement. If one cannot do this, I would most adamantly advise to get recurrent training and required proficiency.
Bertil Aagesen, ATP, DPE
Via e-mail

More
Comments regarding “what you should be telling your readers” recall an incident many years ago when the chief flight instructor was giving dual to a Northwest Airlines captain in a Cessna 310L. The winter was painfully cold and parkas were worn inside the plane.

After an approach and landing at the then-Wold Chamberlain Airport (now Minneapolis International), an engine failed at takeoff the moment the gear was raised. The captain began shouting, “Feather, feather!” The grizzled CFI turned to the petrified student and calmly replied, “Why should I feather a perfectly good engine? We’re climbing at 500 feet a minute.”

The point is that risk management involves evaluating the performance of your aircraft prior to flight. Picking a number, such as 700 feet agl, to make a decision for every flight condition, in any aircraft, may not provide you or your passengers with the best opportunity for survival. If the above situation had occurred with the temperature at, say, 30 degrees C, then the response would have been entirely different.
Ed Grayden, ATP, CFII, MEI, IGI
Via e-mail

Self-Serving
Nice article on self-serve fueling (“Self-Service,” November 2013). One more tip to pass on regarding this procedure: The hard, long aluminum tube at the end of the fuel hose has to be handled as if it were a spear. If the operator is not careful and inserts the nozzle into the gas tank opening with no regard to the force applied, the tip can strike the bottom of the thin fuel tank lower skin and pierce through it. One of my first instructors told me this happened to him in his (admittedly ancient) Cessna 172.
Tor Shwayder, M.D.
Detroit, Mich.

Cellphone use
When reading the Code of Federal Regulations (CFRs), which is where we find the federal aviation regulations, it is important to read the entire regulation to determine the applicability to any situation. In the case of the FCC prohibition of using cell phones in aircraft, under 47 CFR 22.925 as noted in July’s Editor’s Log, the regulations also state under 47 CFR 22.905 that this section only applies to cellular services on the 800 MHz band.

While many U.S. cellular companies use this band in some geographic areas, others do not. This is particularly true of PCS services which operate on the 1900 MHz band, and a majority of the 4G data services. The general prohibition really depends on your cellular company.
Bruce Billedeaux
Kalamazoo, Mich.