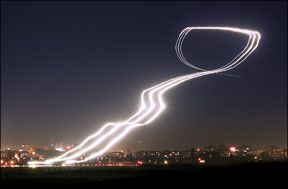 Returning home from a week-long business trip late on a Sunday evening, you pull into your driveway and realize you forgot to leave on the lights inside your house. You fumble the key into the lock, push the door open and grope the foyer wall until you find the light switch. You know this place intimately by sight during the day,

but in the dark it seems oddly unfamiliar.

Landing at your home airport at night evokes a similar experience for many pilots, and arriving after dark at an airport youve never visited before can be quite disconcerting. But with thorough planning and the proper training, landing at night doesnt have to feel like stumbling into an amusement park fun house.

Which Way to The VASI Bar?

It was a crystal clear night back in the summer of 2004 when, as a newly minted instrument pilot, I decided to make the 20-minute flight from my home airport in Gaithersburg, Md., to the Baltimore/Washington International Thurgood Marshall Airport (BWI) to retrieve my brother-in-law, who would be arriving on an airline flight. I had not landed at BWI at night before, though I had flown there for practice approaches quite a bit during the day. I filed IFR and was

issued vectors around the north side of the airport for a visual approach to Runway 33R. I have an extremely vivid memory of looking out the window and seeing a sea of glowing orange lights, but nothing resembling an airport. I could see the airliners on final to Runway 33L, but by the time the controller had cleared me to land, I still did not have 33R in sight.

I recall muttering something less than brilliant to the tower controller and asking him to turn up the runway lights. I may have sounded like a complete idiot, but that 5000-foot runway lit up like The Mother Ship and, amid the audible chuckles of a few pilots who witnessed my blunder, the controller asked me if I had it in sight, which of course I did. I made a safe landing and found my brother-in-law stuffing his face with popcorn at the FBO, none the wiser.

It occurred to me afterward that just because Im offered a visual approach doesnt mean I have to accept one. If youre not familiar with the airport or are uncomfortable making a visual approach for any reason, ask ATC for a published approach if one is available, preferably an ILS. It may cost you a few more minutes in the air, but thats better than bungling the approach and creating unnecessary excitement.

Even if youre not on an instrument flight plan, you can still dial in a localizer or VOR and use it to find the centerline. I teach my VFR students how to find, tune and follow a localizer and glideslope to increase their own situational awareness and safety when landing at night. Use whatever navigation tools you have available to get yourself oriented toward the runway, and on a safe glide path that will keep you clear of obstacles.

In preparation for arrival, switch on all the interior and exterior lights you have at your disposal, but keep the in-cockpit brightness to a minimum to maximize your eyes natural ability to see in the dark. Remember all that business about rods and

cones from your Private Pilot knowledge test? Heres where you put that trivia to good use. (If you have no idea what Im talking about, put down this magazine right now and go read Chapter 10 of the FAAs

So youve found the airport, the lights are on, you have your runway diagram in hand and youre pretty sure youre headed for the runway of your choice. Except theres one slight problem: You dont actually see the runway lights. Check the pilot-controlled lighting frequency and key the microphone again-the lights only stay on for about 15 minutes once activated. Or perhaps what youre looking at is not a runway at all but a parking lot or a road? In a densely populated urban area, sometimes it can be difficult to visually separate the airport lights from the rest of the city.

If your flight begins in daylight but will end at night, turn on the instrument panel lights before the sun sets to give your eyes time to adjust to the changing conditions. Keep a flashlight or two handy in case the interior lights fail. I fly with a small, inexpensive one tethered to a lanyard worn around my neck so it wont get eaten by the airplane like so many pens and pencils.

When you activate the flashlight, cup it between your fingers or cover it with a piece of tissue paper so you dont blind yourself with the bright light. Red-filtered light is easier on the eyes at night but makes the magenta type on a VFR chart seem like invisible ink. See the previous page for a quick explanation of why many cockpits have red lighting at night.

If youre flying in IMC after dark, be careful not to turn on the flashing strobes or beacon as this can lead to spatial disorientation. But if youre clear of clouds, flashing lights on your plane make you much more visible to other traffic, which is one of the greatest benefits of night flying. Strobes can also be incredibly distracting to you and other pilots while operating on the ground so remember to turn them off as soon as you are clear of the runway after landing.

At an airport with an operating tower, the controller will turn the runway lights up for you as you approach. But at an uncontrolled airport its your job.

When youre about 15 miles out, key the microphone on the appropriate frequency to turn the runway lights on to their highest intensity and look for the airport rotating beacon. Most PCL (pilot-controlled lighting) systems are connected to the airports CTAF and use seven clicks for maximum setting, five for medium and three for low. With low-intensity lighting systems, your choice may be limited to “on” or “off” no matter how many times you click the mic. If you hear three clicks on the frequency, thats a sign that someone else may be trying to turn down the runway lights down for landing, so try to make radio contact before cranking the lights up. If its an instrument runway, the PCL system also controls the approach light system. Refer to the FAAs Aeronautical Information Manual and the Airport/Facility Directory-or other resources-for details on the airport/runway you intend to use.

Fly toward the beacon and use an airport diagram, coupled with a terminal area or sectional chart, to deduce where the runway and other structures are supposed to be in relation to it. At some airports in hilly or mountainous terrain the beacon is not actually located on the airport property but on a nearby peak, so be sure you know where the runway is relative to the beacon and surrounding terrain before you begin your descent into the traffic pattern.

While most of us turn our landing light off during cruise, turning it on periodically is a good way to scan for scud and to see if any visible moisture is forming, which could be an indication that IFR conditions are imminent. Be especially cautious if the temperature and dew point at your destination are within five degrees F and closing.

Ground fog can form very quickly. If youre operating VFR and suddenly on final all you see is your own landing light and nothing else, apply full power and go around, using the instruments to maintain a shallow nose-up pitch attitude (five degrees works well) until you establish a stable, positive rate of climb. You may have just stumbled into a low cloud or fog bank. Re-check the reported visibility and if its less than five miles and dropping fast, consider going somewhere else or, if youre instrument rated, asking ATC for vectors for an immediate approach.

Let it Down Gently

With the pre-landing checklist completed, gear and flaps down as appropriate and a stabilized descent established using the VASI or other glide path aid, you and your aircraft should be in an excellent position to meet the runway. Now would be a good time to turn the runway lights down to a lower intensity or ask the tower to adjust them for you.

In addition to creating a host of potentially dangerous optical illusions for the unwary pilot, really bright runway lights can be distracting during the flare and rollout, much like the high beams from an oncoming car can catch you off guard while driving at night. (I dont recall whether the BWI controller turned the lights down for me after I landed but he probably did; I was just elated to have found the runway!)

As you cross the threshold, you should notice your landing light shining on the pavement ahead. Thats your visual cue to gradually begin raising the nose to a level pitch attitude and reducing power, but dont pull it all the way to idle just yet. Keep just a little bit of power and fly the airplane all the way to the runway. As the airplane continues to decelerate, ever so gently raise the nose further until it appears to be level with the row of red lights that mark the end of the runway. Remember to maintain whatever wind drift correction is necessary to stay aligned with the centerline. Hold this attitude until the mains touch the pavement, and then bring the power back to idle to complete the rollout.

This technique rarely results in a full-stall landing and may consume slightly more runway than you otherwise would during a daytime approach at idle power, but it ensures a consistent touchdown that is under control when the peripheral visual cues for the flare are missing. Student pilots or those without much experience landing at night often worry they will land on the nosewheel because they dont have a good sense of the airplanes pitch attitude during the flare, but “putting the nose on the runway end lights” all but eliminates this possibility by raising the nose just a few degrees. In any event-and presuming a tricycle-gear airplane-get the nose up when close to the runway.

I often describe night touchdowns as what I imagine it would be like to land the airplane while blindfolded. Your guide dog (the VASI or glideslope) gets you in position to land, but ultimately you have to use your sense of touch and feel to put the airplane back on the ground softly.

Meredith Saini is a freelance aviation writer and flight instructor flying from the Gaithersburg, Md., area.