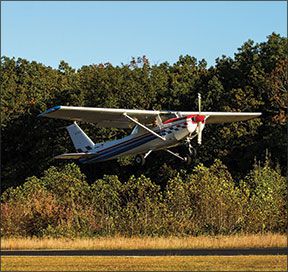 We see it happen here all too often. The Franklin County Airport in Sewanee, Tenn., sits at the western edge of the Cumberland Plateau. During cooler months, northwest winds are thrust up the side of the plateau and swirl back down toward the airport. Tall trees surround the runway and make the airport difficult to see throughout the approach. Pilots in the pattern are greeted by updrafts followed by downdrafts that can make landing on our 50-by-3700-foot runway a challenge.

On most days the winds favor a runway oriented like 15/33; alas, Sewanee offers only one aligned 06/24, along with a healthy crosswind. It keeps us on our toes and welcomes an unsuspecting visitor with a gusty adventure. If adding five knots to the approach speed for the gusts seems like a good idea, then a first-timer may erroneously think adding 10 knots is even more prudent. With the far end of the runway rapidly approaching, the pilot rushes the flare by pulling back on the yoke. Instead of the typical response, the airplane balloons and the pilot attempts to rectify the situation by shoving the nose downward. Then with the ground approaching quickly and perhaps even after a bounce, he pulls back and magnifies the oscillation even more. This is a classic example of pilot-induced oscillation (PIO), with control inputs out of synch with the motion of the airplane. Unfortunately, the exercise often has an expensive and humbling outcome.

A Disturbance In The Force
An airplane can be disturbed from its equilibrium (trim) position in a variety of ways—gusts, deploying flaps, pilot control input or even a passenger who bumps the yoke inadvertently. These disturbances can result in longitudinal motion: pitching up and down about the lateral axis parallel to the wings. These longitudinal excursions involve changes in altitude, airspeed, angle of attack and pitch attitude. The bad news is, as history shows, these diversions from straight-and-level flight in close proximity to a runway seldom work out. The good news? There is a remedy for our visiting pilot and, better yet, he can avoid the scenario in the first place.
While it might at first appear unrelated, a key to understanding PIO and how to recover from it comes can be found by studying a pendulum. To see why, consider a heavy mass (pendulum) hanging from a string anchored so the mass can swing freely back and forth. Gravity acts to pull the mass downward. In the absence of other forces, it hangs still.

If the mass is displaced laterally from its equilibrium position and released, gravity pulls it downward and back to its original position. It sails past the low point but never achieves the height of its initial displacement as air resistance acts as a damping force continually opposing the motion. The damping is light so the oscillatory response continues for some time. If the entire system were placed in a water tank, the motion would experience a greater retarding force and would die out sooner.

An oscillatory system like this is called underdamped. Its period is the time it takes for a full cycle (in this case, center-right-center-left-center). Perhaps if the system were placed in molasses, the mass would move straight back to its resting position. There is so much resistance from the molasses that the system is non-oscillatory and overdamped.

Now imagine that we have three observers—Nate, Bob and Grace—who will assist with an experiment. We’ll set the pendulum in motion the same way and each will attempt to stop that motion by tapping on the mass at various points along the way. First up, Nate chooses to do nothing and witnesses the mass return back to its equilibrium position, albeit after considerable time. He is relying solely on the damping force provided by air resistance.

Next, Bob intervenes by pushing the mass toward the equilibrium position while at its highest position. So he makes it sail past the low point with an even greater speed and, therefore, to an even greater height than without intervention. This exacerbates the oscillation and is worse than doing nothing at all. In fact, if Bob pushed hard enough, he could make the amplitude grow. Bob is out of phase with the oscillation because he’s acting at all the wrong times.

Grace has the best approach: She gives a push against the motion when the speed is highest, that is, while the pendulum is passing through its equilibrium point. Grace is careful to catch it just at the right time and helps the motion come to a halt much more quickly than it would without intervention.

Both oscillations must be demonstrated during certification of general aviation and commuter airplanes under Part 23 of the FAA’s regulations. There is no requirement that the phugoid oscillation be stable but it “must not be so unstable as to increase pilot workload or endanger the airplane.” Although the phugoid oscillation for many Part 23 airplanes is stable, it is typically lightly damped. The idea is that the period (the time to complete a cycle) is so long that a pilot of reasonable skill can step in and arrest concerning or even unstable motions.
In contrast, the short-period oscillation is required to be heavily damped; otherwise, flying would be like standing on a basketball—it can be done, but who wants to?

Fixing PIO
Let’s return to the plight of the pilot landing at Sewanee. He has approached with too much airspeed, flared early and started a PIO. To say it’s uncomfortable is an understatement. The airplane is experiencing longitudinal oscillations (actually a combination of phugoid and short-period), like a pendulum set in motion by the pilot himself. The nose is at its (hopefully) highest position that it will assume.

A pilot like Nate would choose to return the elevator control to an approach attitude and keep it there. The inherent stability of the system is enough to make the oscillations subside. This is not a bad approach, assuming that the aircraft actually is longitudinally stable. If Bob were our pilot and pushed with authority on the yoke while the plane is nose-high and pulled with enthusiasm when the nose is low, then he would make the oscillations grow and the situation far worse—that’s how nosewheels get snapped off. Unfortunately, Bob’s reaction is all too common. While it perhaps seems ridiculous with a pendulum, it must be compelling in the airplane. Typing “pilot-induced oscillation” into www.youtube.com confirms this fact, along with presenting the painful consequences.

Grace has the best idea of all; she is skillful enough to neutralize the elevator control then push when the nose is rising and pull when the nose is falling at the times when the nose is passing through its neutral position. In this way, she can eliminate the oscillations most efficiently.

Realistically, it’s tough to become Grace when we’re met with the unexpected so low to the ground. So if you are unfortunate enough to find yourself in such a situation, your best bet might be to use Nate’s approach—return the elevator control to the approach position and keep it there. Assuming the oscillations are stable, they will die out with decreasing amplitude. A long enough runway might afford the ability to flare again but expect the need to apply power, go-around and fly the approach using a more reasonable airspeed.

AVOIDING PIO
The proper remedy for an unwanted oscillation should be included in any pilot’s toolbox; of course, it is better to avoid the scenario in the first place. An important part of any preflight is verification that the weight and balance is in the envelope specified in the pilot’s operating handbook. This helps guarantee that the stability is as good as it was during certification. Ice build-up throughout the flight can also degrade stability, so avoiding icing conditions or using appropriate removal equipment is important as well.

When approaching an airport with gusty winds, use the airspeed recommended by the pilot’s operating handbook. Approaching with too high an airspeed is often due to a fear of stalls. If you find yourself perpetually fast, a course in stalls and spins may be in order. An hour or two with a flight instructor on a windy day also may do the trick. Flying into an airport like Franklin County-Sewanee is a challenge. But mastering it is a confidence-builder, and the beauty and hospitality make it worth the effort.

Catherine Cavagnaro, ATP and CFI-I, owns and operates an aerobatic school in Sewanee, Tenn. (www.aceaerobaticschool.com) She also holds a Ph.D. and is Professor of Mathematics at The University of the South.