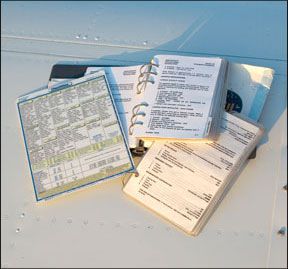 Every Flight Manual, every Pilots Operating Handbook and every aftermarket pilots guide contains checklists. Normal and emergency, and in some airplanes, abnormal and alternate procedures checklists attempt to cover most situations youre likely to encounter. The FAA, instructors and authors (myself included) expend great effort trying to get pilots to use printed checklists.

cumbersome to use. There are some times when you should forget the checklist.

Most in-flight situations are not so time-critical that forgetting to move a switch or control spells immediate disaster. These conditions provide enough time for you to make inputs or move controls, then as time permits pull out a checklist and verify you have forgotten nothing. For instance, when leveling off from climb to cruise you may forget to close cowl flaps; the engine may cool rapidly as airflow accelerates, and cooling drag may prevent the airplane from reaching its maximum speed. But the engines not going to quit, and the airplane isnt going to fall from the sky. Level off, then as time permits reference a printed checklist to catch and correct your omission.

But there are times you need to ask properly, now, to save the scenario. If you dont have complete understanding of what needs to be done at the onset of these scenarios, and do it now, chances are the situation will get much worse, fast. So how do you perform these time-critical actions?

Probably the most time-critical action you could be called upon to take in an airplane comes from an engine failure shortly after takeoff. Airspeed will decay rapidly, so any loss of power while at a high angle of attack requires an aggressive push forward on the controls to maintain a safe speed. This is valid whether youre in a single-engine airplane (preventing a stall and establishing a safe landing speed) or a multiengine aircraft (maintaining airflow over controls for single-engine flight, and preventing a stall).

How far do you have to push? In singles the attitude will look a lot like it does on a steep final approach. In most light twins itll be about level on the horizon, of just slightly nose-high to achieve “blue line” airspeed before you have time to identify the failed engine and feather its propeller. Remember, though, that if you lose power in a climb youll need to push the nose down, promptly and aggressively, to maintain control and a safe flying speed.

This mantra will cover what you need to do if youre close to the ground and need to climb away. Go around? Missed approach? Add full power, establish the proper pitch attitude for climb speed, and confirm you achieve a positive rate of climb. After these “big three” immediate actions, retract flaps and (as appropriate) landing gear per recommendations in the Pilots Operating Handbook or Flight Manual. Forget the checklist, but remember: power, pitch, positive rate.

Switch Off, Open Up

Most POHs have a long, involved checklist for dealing with electrical fire or smoke in the cockpit. The immediate action items that will determine your safety, however, are simply to switch off electrical power and open up vents to clear any smoke from the cabin. In pressurized airplanes “opening up” may mean a cabin pressure dump. “Switch off, open up” will protect you from fire, smoke or other contamination, and give you time to get the airplane on the ground.

An engine failure or fire checklist may sometimes seem daunting, but the process is really quite simple. An engine needs three things to operate: fuel, ignition and air. If an engine has quit and you have enough altitude (read “time”) to attempt a restart, manipulating fuel, ignition and induction air (alternate air in most fuel injected engines; carburetor heat in carbed powerplants) will cover any situation where a restart is possible. If an engine fire calls for an immediate shutdown, or your engine has quit and you need to secure it prior to an off-airport landing, turning off fuel and ignition will minimize the chance of a post-impact engine fire.

If you prefer, you might remember this as controlling rudder, wings and nose to recover from unusual attitudes or stalls. This is actually a variation of the go-around/missed approach technique (power, pitch, positive rate), and I teach the same basic procedure for stalls, go-arounds, missed approaches and even normal takeoffs-establish power, then adjust pitch and confirm a positive rate of climb by controlling rudder, wings and nose.

Power Back, Pull Back

If for any reason you need to abort a takeoff before you leave the runway, remember to power back by pulling the throttle to idle, and pull back on the controls (in tricycle gear aircraft) to maximize stopping power. If you cant come to a stop before departing the runway, then use fuel, ignition to shut down and limit chances of fire.

Military checklists often have a feature that has rarely (maybe even never) made it into general aviation handbooks-bold print items. The bold print checklist steps are those that require accomplishment immediately, at a point when the pilot likely would not be able to reference the written checklist. Military pilots memorize bolt print checklist steps.

Bold print items emphasize that printed checklists are just that, devices to check that what you did from memory was complete and correct. But bold print also gives you an idea of whats most important when dealing with a scenario or indication, to help you better prepare for an actual response. Consider what portions of your airplanes checklists need to be committed to memory.

When things happen fast-like transition from takeoff to initial climb, a go-around or the beginning of a missed approach, or emergency procedures-you can forget the printed checklist. What you cant do is to forget the immediate action steps from those POH/Flight Manual guides. Review your normal and emergency checklists, practice them while sitting in the airplane and actually moving indicators, switches and controls, and commit to practiced memory what would be (if your airplanes manufacturer designed them that way) the “bold print” checklist items.