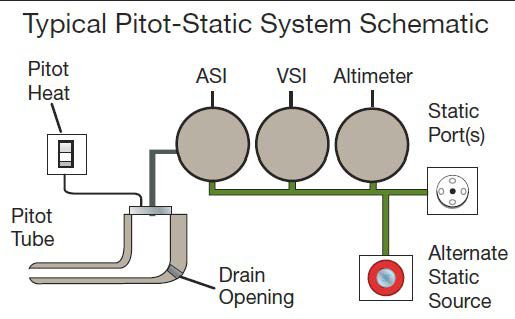 No matter how much automation we fly behind, no matter how many air-data computers are installed and no matter how simple it is, it’s likely a pitot-static system—pretty much like the one Lindbergh flew across the Atlantic—is what generates airspeed and some other basic flight information aboard the aircraft we fly. These systems are relatively simple, consisting of basic sensors, some plumbing and sensitive instrumentation. The difference in air pressure does all the work.

At the same time, other equipment aboard the aircraft—sometimes combined into an air-data attitude heading reference system, or ADAHRS—uses the pressure differential between static air and dynamic air to present various information to the pilot. How and when these systems can fail—as well as what instrumentation may also fail and what we can do about it from the cockpit—should be basic knowledge among pilots. And as the equipment we fly gets more sophisticated, the impact of a pitot-static system problem can grow.

Poster Child
The Boeing 727 departed New York City’s John F. Kennedy International Airport at 19:14 local time December 1, 1974, on a positioning flight to Buffalo, N.Y. Climbing through 16,000 feet, the overspeed warning horn sounded, followed 10 seconds later by the stick-shaker. The jet momentarily leveled at 24,800 feet, stalled and entered a spin, reaching a vertical acceleration of 5G. Eighty-three seconds later, it struck 1090-feet msl terrain in a slightly nose- and right wing-down attitude, having descended from altitude at an average rate of more than 17,000 feet per minute. The Boeing had been airborne 12 minutes. The three flightcrew members were killed; no one else was aboard.

The NTSB determined the probable cause of this accident included “loss of control of the aircraft because the flightcrew failed to recognize and correct the aircraft high angle of attack, low-speed stall and its descending spiral. The stall was precipitated by the flightcrew’s improper reaction to erroneous airspeed and Mach indications which had resulted from a blockage of the pitot heads by atmospheric icing. Contrary to standard operational procedures, the flightcrew had not activated the pitot head heaters.”

This accident, Northwest Airlines Flight 6231, serves as the poster-child for a specific kind of pitot-static system failure, the kind in which the pitot tube becomes clogged or iced over, preventing oncoming air from entering the airspeed indicator (ASI). Instead, as the aircraft climbs, the airspeed indicator only senses reduced static pressure and begins acting as an altimeter, reacting to the increased altitude and reduced ambient pressure by displaying ever-higher airspeed.

Cause And Effect
In a scenario like this, the airplane’s actual airspeed likely is normal for its weight, pitch and power setting. But a pilot’s natural reaction, at least initially, is to increase the airplane’s pitch attitude to compensate. The cruel irony is doing so usually increases the rate of climb, therefore also increasing the apparent “airspeed.” A blockage similar to the one confronting the crew of Flight 6231 also was experienced aboard Air France Flight 447, an Airbus A330 that crashed into the Atlantic Ocean in 2009. Although the effect on the Airbus’s systems was more profound, the eventual outcome was similar to Flight 6231: loss of the airplane and everyone aboard.

In part, that’s because the A330’s systems automatically disengaged the autopilot when it sensed loss of airspeed. The surprised crew failed to recognize the failure for what it was and lost control while ignoring other instrumentation accurately presenting attitude information. But a clogged pitot tube is not the only system failure we may encounter.

As the image in the sidebar on page 9 presents, blockages can occur on the other side of the system, the static-port side. While a pitot tube can become blocked by liquid or frozen water, airframe ice, foreign material and, especially, insects, the static ports aren’t placed directly into the slipstream and usually don’t pick up ice. They can, and do, become blocked by insects and moisture, however, especially when aircraft are stored outside in the elements, where all kinds of critters can find them a handy nesting place. Importantly, static-source blockages can occur with hangared aircraft, also.

A static-source blockage presents differently than a clogged pitot tube, as it should, since it’s the other end of the system that’s not working. If/when the static system gets blocked and the pitot tube remains unobstructed, the ASI will continue to work, albeit inaccurately. Instead, the ASI will indicate airspeeds slower than the aircraft’s actual airspeed when the airplane is above the altitude at which the static ports became blocked. That’s because the air trapped in the system is at a pressure greater than ambient for the higher altitude.
The converse also is true: When the aircraft descends to an altitude lower than the one at which the blockage occurred, the ASI will indicate a higher-than-normal airspeed. That’s thanks to the greater difference between the dynamic air pressure entering the pitot tube and the lower-than-normal-pressure air trapped in the system. The ASI, however, isn’t the only instrument or system potentially affected by a blocked static system.

Other Issues
A blockage in the static system also affects the altimeter and vertical speed indicator (VSI). These instruments work differently than the ASI, but they both depend on changes in static air pressure to do their jobs. When the static air’s pressure doesn’t change, thanks to a blockage, these instruments’ indications don’t change, either. That’s less of an issue with the VSI but can be a very big problem with the altimeter.

The altimeter and VSI depend on changing pressure within the static system. The altimeter responds to such changes as its internal bellows is allowed to expand (lower ambient pressure; higher altitude) and contracts (higher ambient pressure, lower altitude). If the altimeter isn’t connected to a source of static, ambient air as the aircraft climbs and descends, the bellows won’t expand or contract, presenting the same altitude as when the blockage occurred.

The VSI works in a fashion similar to the altimeter, but instead of a bellows, it uses a calibrated leak in its case. That way, the VSI’s dial can return to a zero indication when the aircraft levels off. In the case of a blocked static port, the VSI mainly won’t work at all, presenting a zero climb rate until the blockage is removed.
But these are conventional, “steam” instruments we’re talking about. What happens when a static source blockage occurs with a glass panel? Pretty much the same things, although the automation may deal with it differently.

Depending on the avionics and how it’s installed—is there a second pitot-static system?—a clogged pitot tube likely will result in some message or symbology advising of inaccurate airspeed. What other failures stem from this first one depends on the automated system itself and how it’s configured, a topic that’s way beyond the scope of this article. Likewise, a blocked static port likely will result in similar advisories regarding altimetry and airspeed. How those advisories present themselves and what you can do about it from an airborne cockpit depend on the systems involved. Their documentation is your friend.

Fixing It
When confronted with a blocked pitot, the first thing we’d do is turn on the tube’s heating system, presuming we’re airborne. (In our view, ground operation of a pitot heating system should only occur during momentary testing and on the takeoff roll, since overheating can damage it.) If the blockage is ice, and sometimes if it’s foreign material, heating will melt the ice and may clear other kinds of blockages. Water, too, often can be cleared by using pitot heat. Most of the time, however, disassembly of the system and blowing it out with shop air will be required.

The same may be true of a blocked static port. Most of the aircraft we fly don’t have heated static ports to remove ice or moisture, and most such blockages won’t be affected even if they did. But many aircraft, especially those routinely flown IFR, will have an alternate static source valve.

To bypass the static source, blockage, open the valve, which in non-pressurized aircraft usually allows ambient cabin air to substitute for the static port. As the specific aircraft’s POH will advise, some instruments may behave differently or sluggishly when using the alternate static system. Other configuration changes may be necessary—heating and ventilation may need to be off, for example—when using the alternate static system. And don’t open any windows.

If your aircraft lacks an alternate static source, consider having one installed, especially if you fly a lot of IFR. In any case, and as with a blocked pitot tube, inspection, disassembly and cleaning out the blockage likely may be the only fix. This work must be done by a certificated mechanic and logged to be legal. In some cases affecting the altimeter and/or altitude encoder, recertification may be necessary for IFR operations.
Meanwhile, the lines comprising a pitot-static system in the typical general aviation aircraft are plastic tubing, snaked through the wing from the pitot tube and along the fuselage sidewalls to the instruments behind the panel. These lines become brittle with age and easily can leak, which is one of the reasons we perform altimeter/transponder checks every 24 months (whether we need them or not).

Break the Glass?
Finally, a temporary “fix” to clear a blocked static port can be accomplished from the cockpit, by using the time-honored “break-the-VSI-glass” method. This has the effect of creating an ad hoc alternate static system, with the same caveats as one already installed: some instrument indications may be sluggish or slightly inaccurate. Depending on how you break the VSI’s glass, of course, it may or may not work, either.
With what do you break the VSI’s glass also is a question. Use your iPad? Maybe a small crash axe? And when flying a glass panel with a blocked static source, you likely won’t have a backup VSI. Don’t smash the flight displays! That can get dangerous and expensive very quickly. Instead, break the standby altimeter’s glass, which will have the same effect. If you correctly diagnosed the problem, things should start working again.