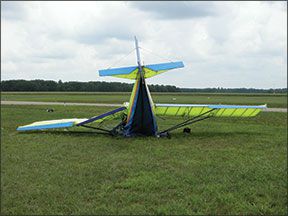 The stats are in, the tallies tallied and the totals have been summed up: Loss-of-control tops the list of general aviation accident causes. Recent studies by industry and government point to loss-of-control (LOC) accidents in all their variations are the leading cause of GA accidents, both fatal and otherwise. According to the U.S. Government Accountability Office, GAO, “From 1999 through 2011, nonfatal accidents involving general aviation airplanes generally decreased, falling 29 percent, from 1265 in 1999 to 902 in 2011.” That’s the good news. The bad news is there were still more than 200 fatal accidents each year during the period.

The most common defining event in fatal GA accidents during the period, according to the GAO, was loss of control in flight. And that generally means pilot error. In fact, pilots remain their own worst threat, with 70 percent of fatal accidents (and 59 percent of non-fatal crashes) resulting from their actions. It then should come as no surprise to learn that the FAA’s own Top Ten Leading Causes of Fatal GA Accidents (the most recent list is reproduced on page 6) returned LOC to the top year after year. With these and other detailed analyses all pointing to the same thing—many of us can’t fly—what’s an industry and a regulatory agency—not to mention the pilots actually losing control—to do?

Breaking It Down
A good definition of “loss of control” is available from SAFE, the Society of Aviation and Flight Educators. In it, SAFE states LOC “refers to airplane accidents that result from situations in which the pilot should have maintained, or regained aircraft control, but did not.” The term is further subdivided into two types: loss of control-in flight (LOC-I) and loss of control-ground (LOC-G). The FAA’s overview of 2001−2010 GA accident data determined 40.2 percent of fatals, or 1259, during the period were categorized as loss of control under ICAO guidelines.

Importantly, the term “loss of control” can apply to some accidents in the other categories, particularly “Unknown,” “Low altitude operations” and “Other,” while it also can be a factor in component-failure-related accidents. It also is present in accidents arising from flying into weather legally and knowingly, albeit unwisely. And there generally are two types of LOC accidents: in-flight and on the ground.

Meanwhile, attempting to prevent LOC accidents is one of the reasons behind the FAA and industry’s recent efforts to deregulate (i.e., simplify) installation and use of angle-of-attack (AoA) indicators. Our article in last month’s issue, “Not Just For Jets Anymore,” explored the regulatory and technical environment for AoA indicators, along with their benefits and how they work.

Importantly, the threat of LOC accidents isn’t restricted to GA. Three relatively recent air carrier losses generated huge interest in understanding and prevent LOC accidents: Colgan Air Flight 3409, Air France Flight 447 and Asiana Flight 214. Each of these crashes involved confusion over cockpit automation and the crew’s ultimate failure to monitor and correct airspeed and descent rate. The same confusions can and do exist in GA cockpits.

Further, the vexing continued-VFR-into-IMC accidents often devolve into loss of control before impact. And pilots lose control in many other creative ways: in maneuvering accidents; and, of course, in those occurring during descent and approach.

LOC Threats
Of course, understanding what is considered an LOC accident isn’t much help if we don’t also know how, where and when one can occur, or the conditions under which losing control doesn’t afford pilots enough time to effect a proper recovery. One of those conditions involves the traffic pattern.

When you’re already low—typically 800 to 1000 feet above ground or less—any stall you enter means there is precious little time and space for recovery. Compounding the challenge are the time and altitude lost before recognition occurs: Just a couple of seconds’ delay in responding to the stall can cost you 25 to 50 feet at a descent rate of 750-1500 feet per minute. Plus, you lose more time and altitude with each second the aircraft takes to react to your input. A few seconds more are required to return to straight-and-level, controlled flight. An altitude loss of several hundred feet can take little time from stall on-set to level recovery. If there’s not enough altitude under you when the stall occurs, you’ll be on the ground before you can fully recover.

Mitigations for this kind of LOC accident include solid stick-and-rudder skills, with an emphasis on pitch control. Really, it’s that simple. Fly the airplane; fly the appropriate speeds. An AOA system can’t hurt, either. Along the way, we recognize airplanes seldom perform exactly at the book speeds for any given pitch-and-power setting. Throw in system errors, possible pitot/static-system leaks, indicator-calibration needs and the like and it’s easy to understand why flying at an improper airspeed can be an issue. Nonetheless, a pilot regularly flying an airframe type should be able to build a from-scratch reference that’s accurate and usable for avoiding too low an airspeed in the pattern.

Runway-related
Of course, we generally fly the traffic pattern when landing, even though LOC accidents occur when taking off. Some of the initial-climb scenarios have the airplane settling to the ground from premature power reductions, too-steep pitch changes, from improper loading and from flying into the down-moving air of a nearby thermal or rainshower.

Mitigating this type of LOC accident isn’t much different from when in the traffic pattern but can require a special eye toward maintaining pitch and power until above pattern altitude and departing the area. Watch the airspeed needle and be mindful about the lower ends of the green and white arcs. Keep it in the green. (And we’d be derelict if we didn’t once again point out the value of an AoA indicator here.)

If you can’t get down on the first third, at the most, then go around: Do it smartly, smoothly. You know touching down beyond a runway’s halfway point works only when you still have thousands more feet of remaining runway than you need. Furthermore, don’t fear the go-around: Mind that inevitable pitch up as you smoothly advance power, then adjust pitch to best climb, then stow any landing gear or deployed flaps when altitude and airspeed permit. When you come back around, that runway will still be there for your next try.

Crosswind landing accidents can take the same form: running out of pavement before running out of speed is a classic. Losing lateral control from too much wind meeting too little control authority also is a classic LOC accident. In either, the aircraft typically departs a runway side versus the departure end. Crosswind takeoff incidents follow the same scenario, but in reverse—control is lost before liftoff—with common results.

In some cases, the only viable mitigation for crosswind landing issues is another, nearby runway better aligned with the wind. Go there, grab a snack, and wait for the winds affecting your preferred runway to relax. As for such an excursion on takeoff…well, it might be time to question the necessity of flying in such conditions.
Takeoff overruns are another, similar story. Locked controls, failure to make full power, high density altitude all contribute. Maybe toes are unconsciously applying the brakes—sometimes it’s the pilot, sometimes it’s an anxious passenger, sometimes it’s a failure to fully release the parking brake.

To prevent this, start with checklist items on control-system movement and range and accept nothing less than full functionality. An engine not making full power requires quick reaction and a quicker stop—you did perform the full mag and prop checks, and leaned the mixture for the altitude, right?

Close encounters with wake turbulence can lead to loss of control despite the pilot’s frantic efforts to counter what’s happening to the airplane. Compounding the event is the frequency with which these encounters occur and their typical location: in an airport traffic pattern and, especially, on short final. To avoid these, monitor your proximity to other aircraft; remember what you learned about the behavior of those horizontal tornadoes. Once upset by wake turbulence, recovery techniques typically taught encourage the pilot to go with the roll and work to avoid significant pitch changes in the process, lest when once again upright and near level the pilot will find the aircraft dramatically far from a normal pitch attitude, and much lower than desired.

Handling Emergencies
Fuel low or exhausted; weather deteriorated; an ailing powerplant. None of these are particularly good places to suddenly abdicate your responsibility to fly the plane. If it’s weather, exercise the prime directive of VFR-into-IMC encounters: Turn around, even if it means a minute on the gauges. Sadly, in all these scenarios, too many pilots suffer brain lock, instant amnesia or whatever it is that makes a trained, seasoned aviator suddenly non-functional. It’s for situations like these that the savvy aviator spends more time than required drilling on safety procedures.

A dead engine—whether for fuel exhaustion or from a mechanical issue—is a dead engine either way. Pick a spot, commit and land there. Gravity gives you no other choice but to land for your own survival. In the process, deal with the crisis! Keep calm and focus on your situation and, remember your Number One Job (yes, we’ll repeat it): Fly the airplane. Remember, too, that airplanes fly quite nicely without power. Maybe not far or for long, and at an accelerated descent rate, but controllably and predictably. Trying to stretch a glide and stalling is the classic loss-of-control accident.

Not every situation pairs with a simple solution; in some cases the mere decision to tackle conditions or weather is the sole divider between a pilot in trouble and the pilot who sits—frustrated and upset possibly—safe and sound on the ground.

At the end of the day, avoiding an LOC accident comes down to avoiding all the stuff we’ve been told to avoid since Day One of our flight training. Whether because of distractions, recklessness, slower traffic ahead or simply sloppy flying, we pilots need to up our game. After all, the equipment seems to be up to the task. Why can’t Johnny fly?

An FAA Fact Sheet from January 2014 states the agency’s “goal is to reduce the GA fatal accident rate by 10 percent over a 10-year period (2009-2018). Loss of Control—mainly stalls—accounts for approximately 40 percent of fatal GA accidents.” The bar chart at right, adapted from the 2012 GAO report, “General Aviation Safety: Additional FAA Efforts Could Help Identify and Mitigate Safety Risks,” shows a more-or-less steady decline in both fatal and non-fatal accidents over the years studied.

Meanwhile, the table at lower right, also adapted from the GAO report, highlights that personal operations account for a much greater share of the overall fatal accident rate than statistics on flight hours alone would indicate.

Finally, the GAO noted decreases in fatal (-24 percent) and non-fatal (-29 percent) GA accidents from 1999 through 2011. These data are depicted in the bar chart. But the GAO also noted the “most common defining event in fatal GA accidents” is “loss of control in flight.” Meanwhile, the most common event for non-fatal accidents is full or partial loss of engine power. In other words, we’re better at handling an engine failure than we are at simply maintaining control of an airborne airplane.