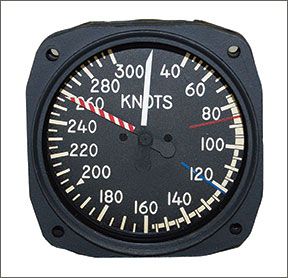 Airspeed is one of the first things we learn about in fixed-wing primary training, It’s an all-important tool for managing an airplane’s performance and helps us determine when we can do certain things, like deploying flaps or lowering landing gear. Too, pilots typically are taught to “aim” for a certain airspeed when performing various maneuvers and at various stages of normal flight. But there are different kinds of airspeed. For example, what we read directly off the instrument panel is subject to error and interpretation, and often must be corrected before it can be used for even basic tasks like navigation. Depending on the aircraft and the conditions, the airspeed instrumentation we use can be merely advisory, or it can be wildly inaccurate for our immediate needs.

Thankfully, these inaccuracies are well understood. Similarly, the effect of wind on groundspeed—which can translate into a headwind or a tailwind, depending on the wind and our direction of flight—is relatively easy to grasp. But something that may not be as well understood is the effect a crosswind can have on airspeed. What? How can the wind affect airspeed while in cruise? To find out, let’s start with a quick refresher on airspeed.

Differences
Our brothers and sisters operating helicopters and hot-air balloons might have a different take on things, but for most of us the importance of monitoring and managing airspeed is unquestioned. Recently, government and industry have emphasized angle-of-attack indicators as another way of determining and measuring performance, and there’s no question their accuracy and repeatability make them valuable tools to help pilots establish and maintain appropriate pitch attitudes. But airspeed remains one of the most important tools we have when we need to measure performance. And it’s front and center for many of the calculations we use in both planning and executing flights.

As we know, airspeed also comes in many flavors and colors. Each variety has its own relevance and uses, plus caveats. One of the easiest ways we used to learn airspeeds and how they build upon each other is the acronym “ICE-T.” This helps us remember them as: (I)ndicated airspeed (IAS), the airspeed as presented on the airspeed indicator. Next up is (C)alibrated airspeed (CAS). This is indicated airspeed corrected for instrument error and positioning error of the pitot tube. The data necessary to convert IAS to CAS is gathered by the manufacturer during flight testing.

Then there is (E)quivalent airspeed (EAS), which is calibrated airspeed corrected for compressibility effects. These effects generally are negligible at the speeds and altitudes most of us fly. But above, say, 200 knots and with altitude in the teens or higher, EAS can be a useful thing to know. Finally, there’s our old favorite (T)rue airspeed, TAS. True airspeed is the speed of the aircraft through undisturbed air. It is equivalent airspeed corrected for air pressure and temperature, and tends to follow density altitude: When density altitude increases, so does the true airspeed for a given calibrated airspeed. These different airspeeds are discussed in greater detail in the sidebar on page 11.

Importance of TAS
True airspeed arguably is the most significant of them all since it reflects the actual speed with which we’re moving through the air around us. That air also may be moving, but for navigation (and bragging rights if nothing else) we really need to how fast we’re going through the atmosphere. Although converting IAS to TAS requires some math, there are rules of thumb even the oxygen-deprived can use. And many airplanes come equipped with airspeed indicators that work like a “whiz-wheel” flight computer and allow us to read TAS directly from the instrument. If we’re flying a glass panel, the magic of good software and hyper-accurate air-data sensors can be made to display real-time TAS (which likely is much more accurate than that provided by the airspeed indicator with a TAS index).

But most important, TAS is used in the calculations returning groundspeed and time en route. Just plug true airspeed into that trusty flight computer or your avionics and off you go. Even if you don’t have a glass panel or all-knowing GPS navigator, you likely have access to a portable device to make these and other flight calculations easy. These days, we can plug in various numbers to the electronic flight bag software running on a portable device in our cockpit and immediately see results with previously unheard-of accuracy. It’s never been easier to generate accurate calculations for various aircraft performance variables.

No Free Lunch
But if there’s an issue with the electronic gizmos, it’s that they have taken away the art of visualization, which allows us to see how the calculations are derived by means of wind triangles and the like. Using the aforementioned E-6B and its offspring, right in front of our eyes we can see drift angle, degrees of correction and the speed increase or decrease we’re experiencing.

Many of us grew up on the E-6B, a trusty, reliable tool allowing us to see our groundspeed plotted by use of the forecast (or actual) winds. Mark the wind on the dial (first converting them from true to magnetic direction) and after moving the dial to the course, put the dot on the TAS and read groundspeed under the grommet. Meanwhile, the drift angle is read by looking at the number of degrees on the slide under the dot as it differs from the course. Voila!

In situations involving strong relative crosswinds, we lose speed by crabbing into the wind. One thing a standard E-6B does not do directly is give us the last piece of the puzzle, effective true airspeed, or ETAS. Effective true airspeed is the speed to which the headwind and tailwind component is applied to predict groundspeed on a CR-style flight computer. In situations involving relatively weak crosswinds, it easily can be a negligible value. But when crosswinds start honking, ETAS can loom larger.

Consider it this way: Due to the crab angle we must fly to get to our destination in a stiff crosswind, the pointy end of the airplane is not pointing in the direction we want to go over the ground (the course). Instead, it’s crabbed slightly into the wind. The amount of crab is determined by the wind. As a result, not all of the true airspeed being produced is being used to travel in the desired direction. Some of it is lost due to the crab (besides the head and tailwind factor). The ETAS can be derived in a number of ways, most simply by determining how long it took to fly the distance between two points. But that’s an after-the-fact calculation; we want to know our ETAS before we fly the route.

I “discovered” ETAS when I purchased a CR-6 flight computer a few years back. While the CR functions in much the same way as an E-6B, it presents things on the wind side in ways the E-6B doesn’t. The CR computer’s wind/groundspeed calculations begin much the same way as with the E-6B. You set true airspeed with the top scale, then place the wind dot and turn the scale until the desired course is at the true course marker. The wind dot reflects the head or tailwind component and the crosswind component. One then subtracts the head or tailwind component to determine groundspeed. However, on the CR flight computer there is an additional step.

If you look to the left of the TAS mark, you’ll notice a dark scale on the inner ring (Image 2 in the sidebar on the opposite page displays the full ETAS scale on a CR-6). It is marked in degrees of drift. To use it, find your wind correction angle and read the ETAS directly above it. On a CR computer, this is the actual number (not the TAS) that should be used in adding or subtracting head- or tailwind to find groundspeed.

Negligible? You Be The Judge
One might say that ETAS isn’t that much different than TAS for most calculations and that we could stop with the raw numbers the CR gives us. That’s true, but consider this: In an aircraft cruising at 125 KTAS, a drift angle of 10 degrees results in 123 knots of ETAS. That’s pretty negligible, and within various error tolerances. However, if the drift angle is 20 degrees, the aircraft loses eight KTAS and the loss begins to grow exponentially from there. A 30-degree correction subtracts 17 knots. If you increase the TAS to 250 knots, the 30-degree correction subtracts 33 knots of TAS.

The E-6B flight computer builds correction for ETAS into its wind-triangle calculations; with the CR computer, you need to at least consider the ETAS value before determining groundspeed. The difference may not be significant, but if you’re using a CR instead of an E-6B, you might be missing a step.

Where Does Airspeed Come From, Anyway?

Anyone familiar with a surface vehicle probably understands how it can use a counter to measure distance traveled, often comparing it with time. We usually call them an odometer and a speedometer, respectively. But since aircraft aren’t rolling on the ground, an odometer’s counter is useless. Instead, we use a contraption—like the ones pictured at right as part of a pitot-static system or glass panel—to produce a simple measurement of the pressure resulting from the aircraft’s movement through the air.

In even the most advanced airspeed sensing systems, at some point air rushes into a tube—thanks to the aircraft’s forward motion—and pushes against something. That “something” can be a pressure transducer, which then converts what it senses into a digital signal for use by other systems. It also can be a diaphragm, which is displaced by the pressure. The amount of displacement is reflected by a needle linked to the diaphragm, which moves along a calibrated scale.

With either an electronic system or a mechanical one, the initial result is indicated airspeed (IAS). Using other sensors—for pressure or temperature, as examples—we can apply various corrections to IAS to produce CAS, TAS or even EAS. Each has its purpose, and we usually need to know their values on every flight.