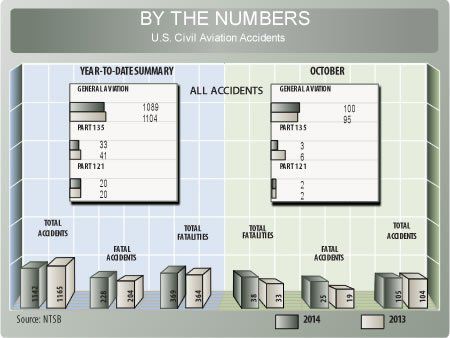 At about 0715 Alaska time, the helicopter sustained substantial damage resulting from a tail rotor pitch control failure. The commercial pilot and two passengers sustained no injuries. Visual conditions prevailed for the Part 135 flight.

While en route at about 1000 feet agl, the pilot felt a “clunk” in the tail rotor control pedals and the helicopter began to yaw to the left. When he attempted to counteract the yaw by depressing the right tail rotor control pedal, there was no reaction from the helicopter and the right pedal traveled to the forward stop. The pilot declared an in-flight emergency with air traffic control, returned to Merrill Field, and executed an emergency run-on landing. Examination revealed the tail rotor pitch change spider assembly.

The experimental BAE Systems MK-67 Hawk collided with a truck at 1149 Mountain time after experiencing a loss of directional control during takeoff. The airline transport pilot and pilot-rated passenger were not injured. The truck driver sustained fatal injuries. The airplane sustained substantial damage during the accident sequence. Visual conditions prevailed.

At 1233 Central time, the airplane was ditched after oil pressure was lost and the engine seized. One passenger was seriously injured, but the pilot and another passenger escaped injury. The airplane was substantially damaged. Visual conditions prevailed.

Shortly after takeoff, at about 2800 feet, the pilot noticed engine oil pressure had dropped to zero. As he was turning back to the airport, the propeller stopped. He ditched in Lake Ozark. The occupants exited the airplane and were located on the beach. An FAA inspector reported he could not find the oil dipstick when the airplane was recovered from the lake. The pilot was adamant that he had replaced the dipstick after checking the oil.

The airplane struck approach lights about 0740 Eastern time during an instrument approach and landing. The solo pilot was not injured; the airplane sustained substantial damage. Instrument conditions prevailed; the flight operated under IFR.

At about 1200 Atlantic time, the airplane was substantially damaged when it impacted a lagoon after the right engine experienced a total loss of power during initial climb. Visual conditions prevailed. The commercial pilot and the passenger were not injured.

The airplane was substantially damaged at about 1410 Eastern time during a collision with a vehicle and storage container after a total loss of engine power on final approach. The private pilot was seriously injured; the passenger was fatally injured. Visual conditions prevailed.

At an altitude about 500 feet, the engine stopped producing power. The pilot switched fuel selectors and turned on the electric fuel boost pumps, but never regained engine power. The pilot performed a forced landing to a parking lot, resulting in substantial damage to the engine compartment and fuselage. Examination revealed large quantities of fuel were available in each wing. The engine controls were all “full forward” and both fuel selectors were in the “Off” position.

At around 1650 Central time, the airplane crashed shortly after executing a low pass over a small private lake. The private pilot and the pilot-rated passenger were fatally injured. Visual conditions prevailed.

A pilot-rated witness described the airplane begin a climbing right turn. As the airplane turned through 90 degrees, its left wing dropped. The pilot tried to recover from the stall by lowering the nose of the airplane and making a full deflection of the rudder control. The airplane leveled out momentarily but suddenly nosed over. The witness heard the engine go to full throttle before impact. The witness said the airplane did not rotate before it hit the ground.

The airplane experienced a control yoke malfunction at about 1130 Pacific time while flying low over the Sierra foothills. The solo pilot was not injured but the airplane sustained substantial damage to both wings. Visual conditions prevailed.

While maneuvering at low altitude along the foothills, the pilot pulled back on the control yoke to climb but the yoke detached from its mount. The airplane began descending and the pilot used power to try to control the airplane’s attitude and altitude. The airplane landed hard in an open field, slid and came to rest on its belly.

At an unknown time, the airplane was substantially damaged when it nosed over while landing. Visual conditions prevailed. The solo commercial pilot was fatally injured.

The wreckage was spotted by an airplane flying over the private airstrip at about 1530. The accident airplane was inverted on the east side of the runway. Ground scars on the turf runway consistent with the airplane’s left and right main landing gear were observed several hundred feet north of the approach end of the north/south runway. The ground scars trekked to the right and then off the runway surface. The airplane came to rest inverted about 400 feet from the first documented touchdown point. The canopy was fragmented, both wings were damaged and the vertical stabilizer tip was bent.

The EMS helicopter experienced a loss of directional control and entered an uncontrolled descent at 2310 Central time, then struck the edge of a hospital building and impacted its parking lot during a visual approach to an elevated rooftop helipad. The helicopter was destroyed by impact forces and a post-crash fire. The solo commercial pilot sustained fatal injuries. Night visual conditions prevailed.

During an earlier landing to the same location, winds were gusting to 25 knots, and the helicopter was yawing “quite a bit,” but landed without incident. Examination confirmed flight control continuity to the tail rotor and indications of engine power.

According to ATC, the pilot advised of an engine failure following takeoff from Runway 21, and requested an immediate return to the airport. The pilot initiated a left turn back toward the airport and the airplane subsequently struck the top of a tall tree prior to impacting the ground in an open area of a golf course, about 800 feet southwest of the approach end of Runway 3. The airplane sustained substantial damage to both wings and the fuselage.

The airplane was substantially damaged when it impacted trees and terrain at about 0413 Eastern time while conducting an instrument approach. The private pilot and two passengers were fatally injured. Dark night instrument conditions prevailed; the flight operated on an IFR clearance.

After executing a missed approach at its planned destination, the flight diverted. Its first attempted ILS approach was cancelled by ATC at about 0349, after “several altitude and course corrections.” When queried by ATC, the pilot reported moderate turbulence at 1200 feet msl and below. He also advised his gyros were precessing in the turbulence and requested no-gyro vectors. Just prior to establishing the airplane on the final approach course, the pilot advised ATC the airplane’s indicated airspeed was 105 knots, while its GPS-derived groundspeed was 32 knots.

At 0405, the pilot advised ATC the airplane had an estimated -hour of fuel aboard. At 0413, the airplane was about 0.7 nm north of the Runway 23 threshold, at a reported altitude of 200 feet, and a ground track oriented toward the runway threshold. About that time, the pilot advised ATC he had the airport in sight and was cleared to land. The accident site was about 2300 feet northwest of the runway threshold. The left fuel tank was ruptured and absent of fuel; a trace amount of fuel remained in the right fuel tank.

At about 1220 Pacific time, the airplane experienced a complete loss of power and landed in a field. The solo pilot was seriously injured, and the airplane sustained substantial damage. Visual conditions prevailed.

During cruise flight, the pilot switched from the right wing fuel tank to the header tank. Shortly thereafter, the engine lost power and the pilot landed on a rocky field.

The airplane was substantially damaged at about 1100 Eastern time during a forced landing following a total loss of engine power. The CFI was not injured; the student pilot sustained minor injuries. Visual conditions prevailed.

While on approach to a selected field during a simulated engine failure, the CFI turned off carburetor heat and applied engine power to end the simulation and initiate a climb. The engine “sputtered and produced no power,” and the CFI conducted a forced landing to the field. Although the airplane cartwheeled, the CFI and student safely egressed.

There was no fuel observed in either of the airplane’s two wing fuel tanks; however, fuel quantity at the time of the accident could not be determined because a fuel line was damaged during impact. After recovery, the engine started immediately, accelerated smoothly and ran continuously without interruption or anomaly.

At about 1252 Eastern time, the airplane was destroyed after it impacted terrain, followed by a post-crash fire. The airline transport pilot and student pilot were fatally injured. Visual conditions prevailed.

Preliminary radar data indicated that the airplane had been operating over a wildlife refuge area for approximately 25 minutes prior to the accident. According to witnesses who were fishing about a half mile from the accident site, they also observed the airplane flying over the wildlife refuge, and then heard the airplane engine make a sound that resembled a cylinder misfire, similar to what they had heard their boat motor do. The engine then “revved up” almost instantaneously, which was followed by a loud boom about 30 seconds later. All three composite propeller blades were fracture separated from the propeller hub. A section of propeller blade measuring about 15 inches long was co-located with the main wreckage. The other two propeller blades were not recovered. Examination of the accident site and wreckage revealed the airplane was not rotating around its vertical axis at impact.

The airplane was substantially damaged at about 1150 Eastern time during an off-airport landing and subsequent post-crash fire. The solo private pilot was fatally injured. Visual conditions prevailed.

According to a friend of the pilot, the airplane’s most recent flight was two years earlier, when it experienced a loss of engine power just after takeoff due to a clogged fuel filter. The airplane sustained a propeller strike in that mishap. The accident flight was the airplane’s first flight since. Recent maintenance included replacing the fuel filter and converting the airplane from a tailwheel to tricycle landing gear configuration. Witnesses near the accident site reported hearing a “spitting and sputtering” engine as they observed the airplane descending from a low altitude. The airplane touched down on the ground, slid for about 75 feet and came to rest upright.

The airplane was landed firmly about 300 to 500 feet beyond the aiming point, but the captain was unable to extend the ground spoilers. When the nose landing gear contacted the runway, he applied “moderate” brakes and held the control yoke forward, but felt no deceleration. He also attempted to deploy the thrust reversers but was unable. He kept the airplane on the runway centerline, and began modulating the brakes. Unable to stop the airplane, he added right rudder input causing the airplane to veer to the right. The airplane went off the end of the runway into sand, causing the nose landing gear to collapse.